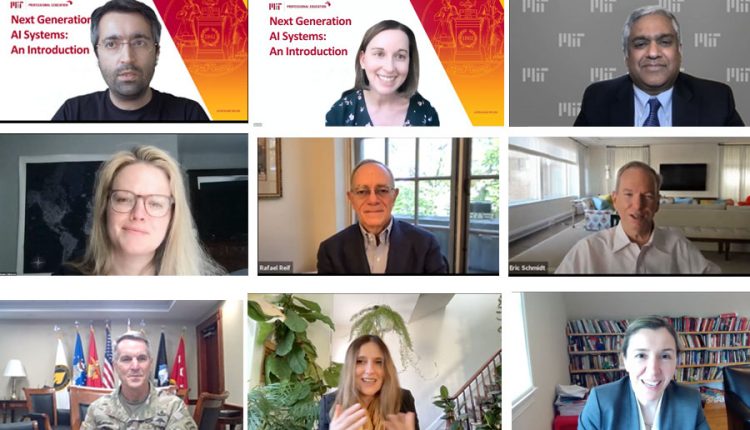 Nearly 300 government and military members participated in a new course designed to explore the next generation of artificial intelligence and related technologies.

When General Richard D. Clarke, commander of the U.S. Special Operations Command (USSOCOM), visited MIT in fall 2019, he had artificial intelligence on the mind. As the commander of a military organization tasked with advancing U.S. policy objectives as well as predicting and mitigating future security threats, he knew that the acceleration and proliferation of artificial intelligence technologies worldwide would change the landscape on which USSOCOM would have to act.

Clarke met with Anantha P. Chandrakasan, dean of the School of Engineering and the Vannevar Bush Professor of Electrical Engineering and Computer Science, and after touring multiple labs both agreed that MIT — as a hub for AI innovation — would be an ideal institution to help USSOCOM rise to the challenge. Thus, a new collaboration between the MIT School of Engineering, MIT Professional Education, and USSOCOM was born: a six-week AI and machine learning crash course designed for special operations personnel.

“There has been tremendous growth in the fields of computing and artificial intelligence over the past few years,” says Chandrakasan. “It was an honor to craft this course in collaboration with U.S. Special Operations Command and MIT Professional Education, and to convene experts from across the spectrum of engineering and science disciplines, to present the full power of artificial intelligence to course participants.”

In speaking to course participants, Clarke underscored his view that the nature of threats, and how U.S. Special Operations defends against them, will be fundamentally affected by AI. “This includes, perhaps most profoundly, potential game-changing impacts to how we can see the environment, make decisions, execute mission command, and operate in information-space and cyberspace.”

Due to the ubiquitous applications of AI and machine learning, the course was taught by MIT faculty as well as military and industry representatives from across many disciplines, including electrical and mechanical engineering, computer science, brain and cognitive science, aeronautics and astronautics, and economics.

“We assembled a lineup of people who we believe are some of the top leaders in the field,” says faculty co-organizer of the USSOCOM course and associate professor in the Department of Aeronautics and Astronautics at MIT, Sertac Karaman. “All of them are able to come in and contribute a unique perspective. This was just meant to be an introduction … but there was still a lot to cover.”

The potential applications of AI, spanning civilian and military uses, are diverse, and include advances in areas like restorative and regenerative medical care, cyber resiliency, natural language processing, computer vision, and autonomous robotics.

A fireside chat with MIT President L. Rafael Reif and Eric Schmidt, co-founder of Schmidt Futures and former chair and CEO of Google, who is also an MIT innovation fellow, painted a particularly vivid picture of the way that AI will inform future conflicts.

“It’s quite obvious that the cyber wars of the future will be largely AI-driven,” Schmidt told course participants. “In other words, they’ll be very vicious and they’ll be over in about 1 millisecond.”

However, the capabilities of AI represented only one aspect of the course. The faculty also emphasized the ethical, social, and logistical issues inherent in the implementation of AI.

“People don’t know, actually, [that] some existing technology is quite fragile. It can make mistakes,” says Karaman. “And in the Department of Defense domain, that could be extremely damaging to their mission.”

AI is vulnerable to both intentional tampering and attacks as well as mistakes caused by programming and data oversights. For instance, images can be intentionally distorted in ways that are imperceptible to humans, but will mislead AI. In another example, a programmer could “train” AI to navigate traffic under ideal conditions, only to have the program malfunction in an area where traffic signs have been vandalized.

Asu Ozdaglar, the MathWorks Professor of Electrical Engineering and Computer Science, head of the Department of Electrical Engineering and Computer Science, and deputy dean of academics in the MIT Schwarzman College of Computing, told course participants that researchers must find ways to incorporate context and semantic information into AI models prior to “training,” so that they “don’t run into these issues which are very counterintuitive from our perspective … as humans.”

In addition to providing an orientation to this concept of “robustness” (how prone a technology is, or is not, to error), the course included some best-practice guidance for wielding AI in ways that are ethical, responsible, and strive to limit and eliminate bias.

Julie Shah, faculty co-organizer of the USSOCOM course, associate dean of social and ethical responsibilities of computing, and associate professor in the Department of Aeronautics and Astronautics at MIT, lectured on this topic and emphasized the importance of considering the future ramifications of AI before and during the development of both the use plan and the technology itself.

“We talk about how difficult [it is to predict] the unintended uses and consequences,” she told course participants. “But much like we put all of this engineering work into understanding the machine learning models and their development, we need to build new habits of mind and action that involve a range of disciplines and stakeholders, to envision those futures in advance.”

In addition to moral and safety issues, the logistics of advancing AI in the military are complex and involve a lot of moving parts; the AI technology itself is only one part of this picture. For instance, the actualization of a fleet of military vehicles operated by a handful of personnel would require novel strategic research, partnerships with manufacturers to build new kinds of vehicles, and additional personnel training. Further, AI technology is often developed in the private or academic sectors, and the military doesn’t automatically have access to those innovations.

Clarke told course participants that USSOCOM had been a “pathfinder within the Department of Defense in the early application of some of this data-driven technology” and that connections with organizations like MIT “are indispensable elements in our preparation to maintain advantage and to ensure that our special operations forces are ready for the future and a new era.”

Schmidt agreed with Clarke, adding that a functional hiring pipeline from academia and the tech industry into the military, as well as the highest and best utilization of available technology and personnel, is essential to maintain U.S global competitiveness.

The USSOCOM course was part of the ongoing expansion of AI research and education at MIT, which has accelerated over the last five years. Computer science courses at MIT are typically oversubscribed and attract students from many different disciplines.

In addition to the USSOCOM course, AI initiatives at MIT span many areas and initiatives, including:

“More than a third of MIT’s faculty are working on AI-related research,” Chandrakasan told course participants.

Originally envisioned as an on-campus program, the USSOCOM course was moved online due to the Covid-19 pandemic. This change made it possible to accommodate a significantly higher number of attendees, and roughly 300 USSOCOM members participated in the course. Though it was conducted remotely, the course remained highly interactive with roughly 40 participant questions per week fielded by MIT faculty and other presenters in chat and Q&A sessions. Participants who completed the course also received a certificate of completion.

The success of the course is a promising sign that more offerings of this type could become available at MIT, according to Bhaskar Pant, executive director of MIT Professional Education, which offers continuing education courses to professionals worldwide. “This program has become a blueprint for MIT faculty to brief senior executives on the impact of AI and other technologies that will transform organizations and industries in significant ways,” he says.