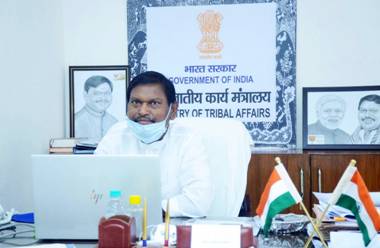 Speaking on the occasion, Shri Arjun Munda said that Central Government initiatives are bringing paradigm shift in entrepreneurship and help meet the aspirations of the youth in North East.He emphasised on the importance of market accessibility and said that products of the tribal areas are environment friendly. Union Minister said that creating demand in global market is important along with quality value added products . He said that the Prime Minister is particularly interested in exploring the potential ofthe North-East. North East region has unique natural resources and this has to be leveraged for making products which would be competitive in global market place, he added. Shri Munda said that the export of products from tribal areas should be encouraged and has huge potential from perspective of employment. In this webinar platform, appreciating the efforts of Sikkim people, in a unique gesture Union Minister launched 80 Pradhan Mantri Van Dhan Kendras of Sikkim with well wishes to them.

Chief Minister of Sikkim, Shri Prem Singh Tamang, appreciated the efficacy of the Pradhan Mantri Van Dhan Yojana and said that its advantages have a correlation to the socio-economic development of the region.

Secretary, Ministry of Tribal Affairs, Shri Deepak Khandekar said that the programme is a Game-Changer in the North East with Pradhan Mantri Van Dhan Yojana driving Atma-Nirbhar Bharat as ‘Engines of Growth’ for Tribal Communities in North East.

Skill-Lync collaborates with Foundation for Excellence to…

In a detailed discussion, MD, TRIFED Shri Pravir Krishna said that ‘Van Dhan Yojana’ is a Market Linked Tribal Entrepreneurship Development Program for forming clusters of tribal SHGs and strengthening them into Tribal Van Dhan Kendras. This is for promoting enterprise by developing clusters of tribal SHGs and strengthening them into Van Dhan Vikas Kendras of 300 members each. It’s objective is to take the ‘MSP for MFP program’ to the next level through establishing tribal enterprises, generating livelihoods leading to income enhancement. It is a program for gathering, value addition, processing, packaging, branding and retail-marketing for MFP products through tribal entrepreneurs.

Graduation for Class of Winter 2020 Advanced Management Programme in Business…

Skill-Lync collaborates with Foundation for Excellence to equip engineering students…

iednewsdesk Oct 26, 2021
Living cells are the basic building blocks of all organisms. We, as humans, are essentially a collection of…

University of Göttingen: Student numbers at the start of the semester

University of São Paulo: Application that predicts the evolution of…

Tomsk State University: EU plans to collaborate with the TSU Center of…