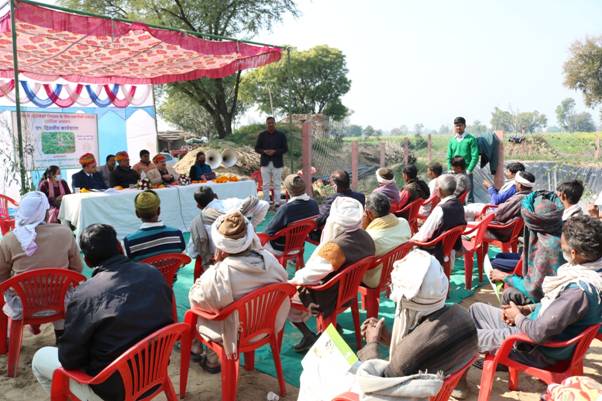 New Delhi: A field workshop on “Techno-management options to control Orobanche in mustard-a pilot study” was jointly organized by Institute of Pesticide Formulation Technology (IPFT), Gurugram, Haryana and the ICAR-Directorate of Rapeseed-Mustard Research (ICAR-DRMR), Bharatpur at village Gurda Nandi in the Bharatpur district.

The workshop was held at the project site and attended by the Scientists from IPFT, Gurugram and the ICAR-DRMR, Bharatpur as well as by the 50 mustard growing farmers whose crop is affected by Orobanche.

Orobanche a serious hidden parasitic weed in mustard cause severe yield loss to the extent of up to 50% and there is no absolute control measures developed so far, said Dr. P.K. Rai, Director, ICAR-DRMR, Bharatpur. He explained the mechanism of parasitism of Orobanche in mustard, its chemistry of attachment and bio-physical behaviour. The work initiated on innovative herbicide formulation and field testing showed good insights about the Orobanche management and will come out with fruitful results in the coming years, said Dr. Jitendra Kumar, Director, IPFT, Gurugram. He apprised that a joint project is launched by theInstitute of Pesticide Formulation Technology (IPFT), Gurugram, Haryana and the ICAR-Directorate of Rapeseed-Mustard Research, Bharatpur under the able guidance of Sh. Kashi Nath Jha, Joint Secretary, Dept. of Chemicals & Petrochemicals, Ministry of Chemicals & Fertilizers, New Delhi.

On this occasion a technical bulletin and a leaflet on Orobanche management was released. In the scientist-farmer interaction, famers expressed their misery due to menace caused by Orobanche in the mustard which is a main cash crop in this region and asked for any immediate control measure.

Spices Board organizes a virtual BSM for the turmeric