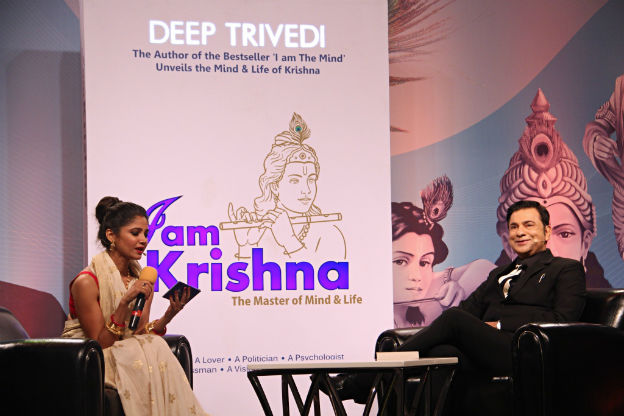 Chennai: Renowned author and pioneer in spiritual psychodynamics, Deep Trivedi launched his book ‘I am Krishna – The Master of Mind & Life’ today launched. ‘I am Krishna’ is the world’s first attempt at historically documenting the life of one of the world’s most revered personalities – Krishna, a man of flesh and blood that walked the earth several centuries ago. The highlight of the event was the presence of popular Indian actress Ratan Rajput who was in discussion with Mr. Trivedi about the book and his thoughts behind his work.

An undeniably powerful personality, the book depicts Krishna’s personality and his journey from being a cowherd boy to becoming the King of Dwarka. Krishna was the master who knew the art of enjoying life to the fullest even in difficult times and his is a classic example of a Rags-to-Riches story.

When asked about the book, Deep Trivedi, author of the book said“’Krishna’ is a name synonymous with victory and flamboyance, yet he has always been an enigma. Through this book I have tried to bring out the diverse facets of his personality, which otherwise, are difficult or rather impossible to comprehend, in its entirety.”

He further added, “Krishna is such a multi-dimensional personality that there has never been a dearth of names by which he has been addressed such as Vasudeva, Madhusudan, Kanha, a supreme being or the numerous questions asked based on his personality and actions which invariably make people curious about him. This book contains the answers to all these questions, and that has been possible only after a long and thorough study of all the scriptures related to Krishna such as Mahabharat, ShatapathaBrahmana, AitareyaAaranyak, Nirukta, Ashtadhyayi, GargaSamhita, Jataka Katha, Arthashastra, Indika, HarivamsaPuran, Vishnu Puran, Mahabhashya, Padma Puran, MarkandeyPuran and KurmaPuran to name a few.”

Since the author of the book is a pioneer in spiritual psychodynamics, the book depicts the psychology of Krishna at various important points and its subsequent transitions, which makes it clear for the readers as to what he did and why. Written in first person, the book gets Krishna to talk about his life, his thoughts and reasons for doing what he did. Most notably, it tells people that he was not born a god, and that he attained self actualisation from his deeds and actions. Assuming someone as god or destined to be god, shuts all your doors to learning from them and their legendary life whereas Krishna is the only perfect and complete man history has ever witnessed and his life offers a lot to imbibe and learn for everyone.

A lot of guests who were present at the event couldn’t let go of the opportunity of getting their personal copies of the book signed by the author himself and posed next to him and the actress for a memorable photograph.

The book is priced at Rs 399 and available at all leading book stores and e-commerce sites.

Deep Trivedi is a renowned author and pioneer in psycho-dynamic spirituality, who not only writes with an insightful perspective, but also conducts lecture sessions on various life-altering topics. His lecture series on the Bhagavad Gita continued for about 168 hours over 58 days and has earned him a place in the India Book of Records and the Asia Book of Records. Besides, he also holds the record for the maximum number of lectures, unravelling the hidden gems of wisdom in the Ashtavakra Gita and Lao Tzu’s, Tao-Te-Ching. He has been conferred an honorary Docrorate by the World Records University for his works on psychology.

His book ‘I am The Mind’ published last year has been on the bestseller list throughout the year. This in itself proves his in-depth understanding of human psychology and his command over laws of nature. This is the reason why his works have brought about a transformation in lakhs of people who have listened to his lectures and read his books.