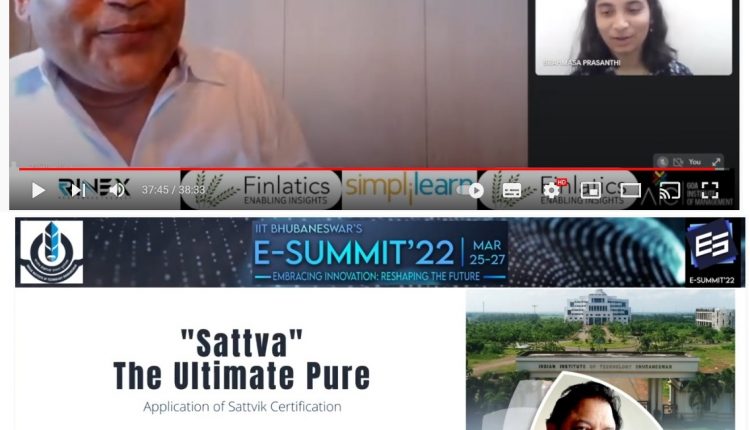 New Delhi: Abhishek Biswas, Founder of Sattvik Council of India was the keynote speaker at IIT Pune & IIT Bhubaneswar where he spoke to the young minds of the university to help them understand their role in innovation, technology, and how they could embrace it for reshaping the future.

Abhishek Biswas spoke about the incorporation of innovation in entrepreneurship while focusing on the importance of positioning, acceptance from the consumers, product and consumer relevance, and passing capacity.

Furthermore, he spoke about his foray into international business, and it was the differing food standards that were what caused him to come up with the idea. When he was in Thailand, he realized that he was just one of the millions of people who weren’t able to get access to readily available vegetarian food. The need for vegetarian food is not solely an Indian issue because he saw people from all walks of life have the same dilemma. This is what led him to embark on a journey of taking notes relentlessly to understand the plight of food standards all across the globe.

He believes that everyone has the right to eat, no matter where they come from, and that this right is not just about what is consumed, but how it is consumed without any fears and doubts in mind. This is how The Sattvik Council of India was born- it’s been 6 years since they started as a humble NGO, and now they’ve risen to be the world’s first vegetarian food and lifestyle certification body.

He strongly believes for new-age startups, the idea needs to be realistic and nurture their own creation instead of replicating old ideas. Doubt and fear render an idea to be tired and unoriginal. He also thinks that after the pandemic, whatever today’s generation is developing, needs to focus on how to save what’s already there in the environment. Before the pandemic, approximately 60% of the business shut down, with only 10% being able to bounce back, which the current generation of entrepreneurs need to face head-on. Sustainable businesses need to be redefined; more than innovations, we need solutions.

Sattvik has collected 40 codes for vegetarian safety. They have vegan, Jain, pure-vegetarian categories, and so on — so that no matter what the diet, people know what they are eating and what’s best for them.

Sattvik’s quality checks are stringent. So if a railway has been certified as “vegetarian”, that railway will have a check-in point at every few stations to ensure that there is no outside contamination. Shri Ramayan Yatra has already been provided vegetarian certification from the Sattvik Council of India and will soon certify the Vande Bharat.

He also mentioned that on 23rd March 2022, SCI signed an MOU with IHM Bhubaneshwar to run the first Sattvik center of excellence. Sattvik has 2 centers in the USA, India, and one in Canada and plans to expand to 6 countries in 2022. The next 10 years are very important for India in terms of entrepreneurship.

Abhishek Biswas said, “Sattvik Council is now taking bigger leaps, we are launching our courses lead online auditor (60 hr duration) where 2nd and 3rd -year students can enroll themselves & earn dispensable income. We are with the Bureau Veritas (Audit Partner) & many big companies today. We also offer internship programs in partnership with IRCTC, known as “VFRS”. Anyone can view this on the IRCTC portal & register themselves after 4th April 2022.