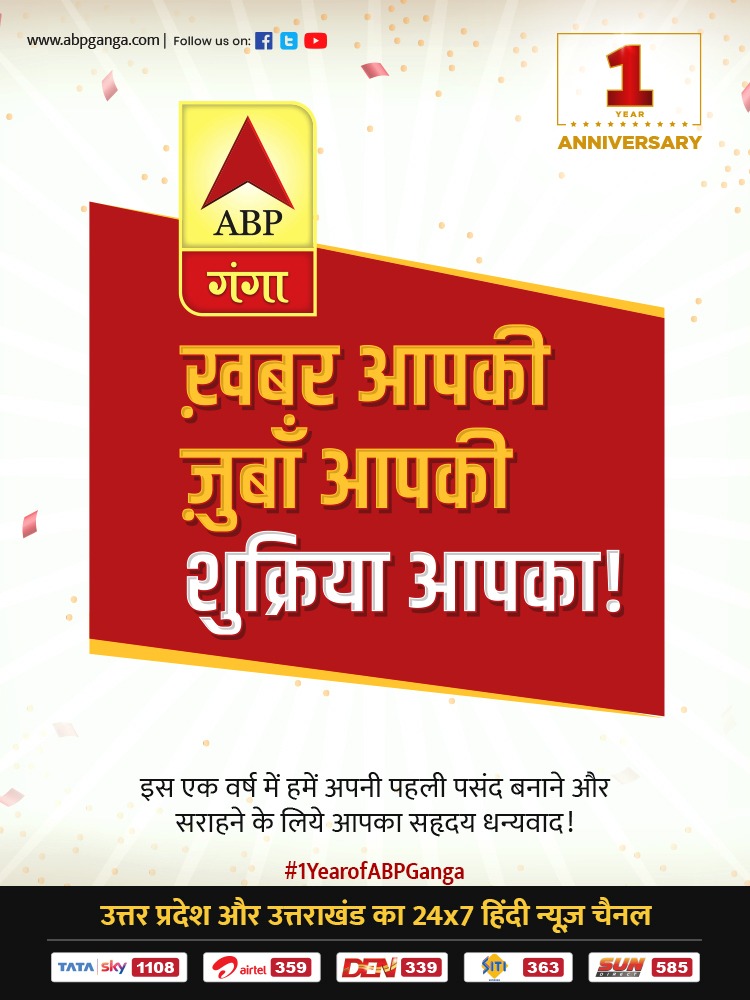 ABP Ganga grows dominance in one year of successful operations

Lucknow: India’s leading & fastest-growing regional Hindi news channel for Uttar Pradesh and Uttarakhand, ABP Ganga, celebrates one year of successful operations today. Through 24×7 local news coverage, viewer-driven content, and on-ground initiatives, ABP Ganga has carved a niche for itself in the highly competitive regional news markets of UP & Uttarakhand, acquiring a special place in the hearts of the viewers.

Along with ABP News, ABP Ananda, ABP Majha & ABP Asmita, as part of the ABP News Network, ABP Ganga is only the latest in a portfolio of market leading regional news channels, all of which were in a leadership position by the end of their first year itself.

The channel launched last year amidst the 2019 general elections, debuting at No. 3 in the Urban UP & Uttarakhand market, a market with more than 12 regional news players. Embodying the philosophy of ‘Khabar Aapki, Zubaan Aapki’, ABP Ganga has made rapid strides and firmly entrenched itself as a leader in the premium urban markets, cementing its place amongst the Top 3 channels in the region.

Following a live & grounds-up approach to reporting, ABP Ganga, since the very beginning, has set the tempo for other channels to follow. Coupled with its editorial philosophy of being the voice of the people, the channel’s approach to news reporting has been highly appreciated by the viewers, and the numbers tell the story themselves. Be it the 2019 General Election Results or the Ayodhya Verdict or the Union Budget or even PM Narendra Modi’s recent lockdown speech, ABP Ganga has been the clear No. 1 in its respective segment – a trait it shares with the entire ABP News Network, which has a rich & proven legacy of leadership on big news days.

With path-breaking election shows such as ‘Charcha Garam Hai’ & the women-centric ‘Mera Haq, Mera Vote’, to resetting the standards with ‘High Alert’, its crime show, to delivering the complete primetime news package – ABP Ganga’s content’s depth & diversity has been pertinent to its success.

Equally impressive has been the channel’s success in not just creating, but also solidly establishing 3 new IPs in its first year itself. The concept of ‘ABP Ganga Town Hall’, which brings together the people & the powers that be in a city to talk about & find solutions & resolutions, has had 4 successful iterations in Kanpur, Gorakhpur, Prayagraj & Varanasi. ‘Pravaah’ – the channel’s flagship conclave property, has seen 3 editions in the last 12 months, including 2 state conclaves with the respective Chief Ministers of Uttar Pradesh & Uttarakhand, which were preceded by an Election Special Conclave in Varanasi during the 2019 General Elections. And closing off its first year was the channel’s biggest IP yet – ABP Ganga Naari – a mammoth 9 city, 2 week long activation which culminated in a Grand Event in Lucknow on International Women’s Day – an initiative, or rather an effort, to honour the women in our society who are selflessly doing their bit to improve society & humanity.

Through these engrossing shows and impassioned initiatives, ABP Ganga has emerged as the inevitable choice of viewers.

Speaking on this milestone, Mr. Avinash Pandey, CEO, ABP News Network said, “We are absolutely elated to achieve this milestone, having created a strong resonance with the viewers in such a short span of time. Over the past one year, ABP Ganga has been fiercely pursuing pertinent issues, both of local and national importance with cutting edge reporting. And as we embark on a fresh chapter, we plan to add more depth in our programming portfolio through special initiatives and wholesome content. We will leave no stone unturned in creating an even more enhanced viewing experience.”