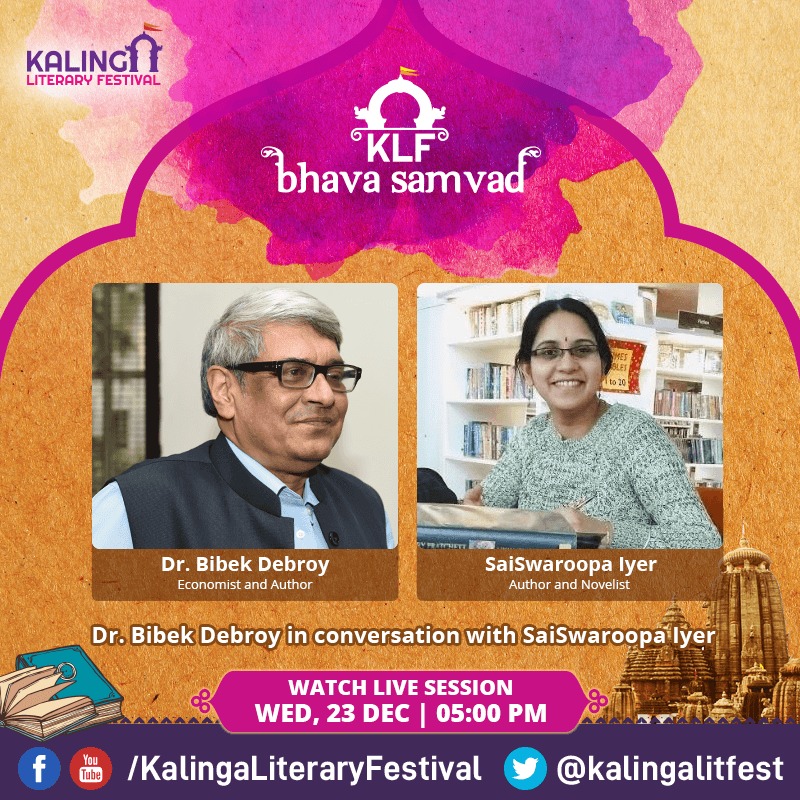 Author and economist Dr. Bibek Debroy (Chairman, PM’s Economic Council) will be in conversation with mythologist Saiswaroopa Iyer today on KLF Bhava Samvad at 5 pm. The session will be streamed live on all the social media platforms of Kalinga Literary Festival (Facebook, Twitter, YouTube).

The session will be on Bibek Debroy’s ‘Mahabharata’ Series. The series can fascinate anybody who belongs to India or holds an interest in mythology, will know the value that Mahabharata has. It is remembered as a war between two mammoth cousin families

‘The Pandavas’ and ‘The Kauravas’ were two cousin families which have had many disputes over land and Kingdom over the years. However, Mahabharata is about the conflicts of ‘Dharma’. The ‘epic’ is said to feature every possible human emotion throughout the course of the war. The conflicts are intense and innumerable. There are no rules except the rule of ‘Dharma’. There are no clear directions to any right doings or wrong doings for the characters. Each action would have a consequence that they would have to bare.

The epic also leaves the readers with many moral value lessons. The Mahabharata is known to be one of the most legendary books, one which has been etched in the history of our nation.

Acclaimed mythologist and writer Bibek Debroy belongs to the state of West Bengal, India. He is known to be a popular economist and has also published many articles, books and papers that have gained recognition in the field. His interests also include subjects like Indology and Sanskrit. Some of his famous works include Sarama and Her Children: The Dog in Indian Myth and his translation of the holy book of Hinduism, that is The Bhagvad Gita. Bibek Debroy has been honoured for his work and knowledge by a Padma Shri award in the year 2015.

He is a member of Niti Aayog. He is an economist who has published popular articles, papers and books on economics. He also writes on Indology and Sanskrit. Penguin published Sarama and Her Children: The Dog in Indian Myth in 2008 and his translation of the Bhagavad Gita in 2006. Bibek Debroy was awarded the Padma Shri in 2015.