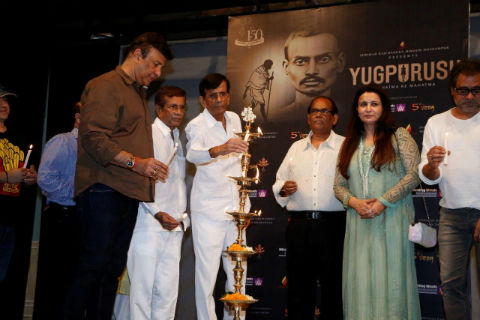 Mumbai: This Independence Day, the 806th show of the historical and dramatic masterpiece – ‘Yugpurush – Mahatma’s Mahatma’ opened to a packed auditorium with over 1000 attendees at Juhu, Mumbai. Whistling Woods International’s (WWI) 5th Veda cultural hub was proud to be associated with this highly acclaimed play, which has touched the hearts of people around the country. The play is an inspiring and riveting portrayal of the close association between Mahatma Gandhi and his spiritual mentor, Shrimad Rajchandraji, and has been produced by Shrimad Rajchandra Mission Dharampur (SRMD), a spiritual organisation founded by Pujya Gurudevshri Rakeshbhai.

Several dignitaries from the film and theatre industry, including Shabana Azmi, Saroj Khan, Abbas Mastan, Anees Bazmee, Anu Malik, Poonam Dhillon, Satish Kaushik and many others attended the event and expressed their immense awe through constant applauds for the play. Also, in addition to the students from Whistling Woods International, the show also witnessed attendance of students from various other institutions. The young audience was deeply moved by the heart-touching message of the play.

The evening started with the lamp lighting ceremony by the celebrities present at the event. It was followed with the screening of various AVs related to the play and associated organisations.

“In my moments of spiritual crisis, Shrimadji was my refuge.” – Mahatma Gandhi, The Story of My Experiments with Truth (Ch. Raychandbhai)

To share Gandhiji’s life principles, renowned filmmaker Subhash Ghai’s ‘Whistling Woods International’ joined hands with SRMD to host the play for the film fraternity. Mr. Ghai staged the play, especially for the film and theatre community, as a tribute to the core values and philosophy of the nation – indeed a fitting way to celebrate this special day, reminiscing about the values that brought us independence and today, form the bedrock of our culture.

Pujya Gurudevshri Rakeshbhai, Shrimad Rajchandraji’s ardent devotee and the Founder of Shrimad Rajchandra Mission Dharampurshared, “The birth and life of the Great Ones are worth remembering. They awaken our latent strength and kindle the desire to become like them.”

A major highlight was that this special show celebrated the ‘World Organ Donation Day’. Mr. Ghai along with the team of ‘Yugpurush’ and SRMD created awareness about the importance of Organ Donation, on this occasion. They inspired those present to take the Organ Donation pledge in order to serve and help mankind. WWI has always encouraged arts and culture in the country along with supporting various social causes. Its association with SRMD is another step forward in that direction.

In addition to the Transmedia Gujarati Screen and Stage Awards received previously for the Best Drama, Best Director and Best Actor in a Supporting Role, ‘Yugpurush’ was recently bestowed with the prestigious Dadasaheb Phalke Excellence Award 2017 for ‘Best Drama’. With acclaimed director Rajesh Joshi of Code Mantra-fame at the helm, the play has been scripted by well-known playwriter, Uttam Gada of Maharathi-fame. The music direction is done by popular composer duo, Sachin-Jigar.

Encouraging and appreciating the cast and crew of the play, the day came to a close with Mr. Ghai felicitating them amidst the thunders of applause.

Manish Sisodia, Governor of Haryana to be Chief Guest at CEE Education Conclave 2017 in Delhi