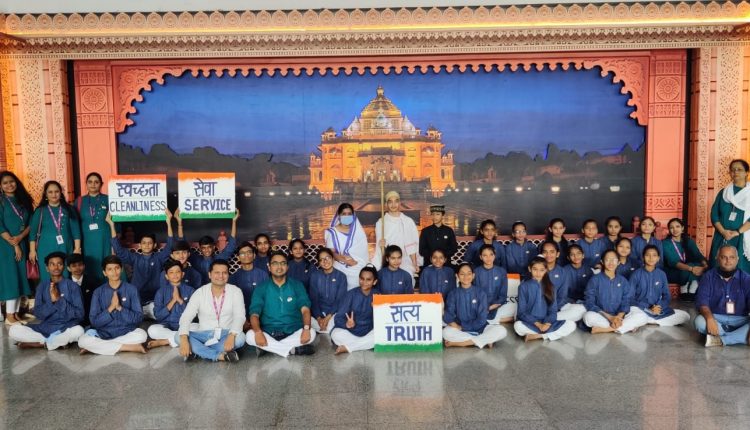 On the morning of 152nd Gandhi Jayanti, passengers at Ahmedabad airport were in for a special surprise

Hyderabad:  which is celebrated as Gandhi Jayanti each year, holds a special significance for Ahmedabad – where Bapu resided after returning from South Africa. The city has witnessed his great contributions for India’s freedom struggle and is home to the Sabarmati Ashram. On the occasion of his 152nd birth anniversary, 32 students of standard VIII to XI of Adani Vidya Mandir, Ahmedabad (AVMA) enacted the life and values of Mahatma Gandhi at the Sardar Vallabhbhai Patel domestic airport by performing a flash mob. Adani Vidya Mandir is a flagship school of Adani Foundation, the CSR arm of Adani Group.

Titled “Saluting the Mahatma”, the AVMA students’ performance aimed to pay tributes to the Father of our nation who led the fight for independence through non-violence. It was a humble attempt to commemorate his life and remember his values by taking the artistic route. The unique celebration was replete with music, dance and creativity. It was a medium to not only inspire the students but also the passengers at the airport, prompting them to reflect and relive on Gandhian principles.

Hon’ble trustee of AVMA Smt Shilin Adani wishes that the students understand and take pride in India’s rich history and culture. “It was Bapu’s love for his motherland and his people that made him fight for freedom and battle caste discrimination. He promoted non-violence, Satyagraha, cleanliness, and the Swadeshi movement, amongst many other things. We believe that there is no better way to learn than through actions and creative expressions,” she said.

In this flash mob, the entire Ahmedabad airport team extended all out support and efforts to make it memorable.

Adani Vidya Mandir schools create a secure and stimulating learning environment for underserved students who need support to pursue and continue their studies. They provide cost-free, high-quality education to meritorious students from economically weaker sections of the society. Currently present in 4 locations – Ahmedabad (Gujarat), Bhadreshwar (Gujarat), Surguja (Chhattisgarh) and Krishnapatnam (Andhra Pradesh) – the schools also provide complementary support in the form of daily nutritious meals, books, transportation facilities and uniforms to all students. Started in 2008 with 134 students, today more than 2,400 students are a part of the Adani Vidya Mandir schools.

· Titled “Saluting the Mahatma”, the performance was a platform for the students to learn and express creatively

· Adani Vidya Mandir is a flagship school of Adani Foundation, the CSR arm of the Adani Group

Uniza Group launches a novel solution for the management of Vitiligo

iednewsdesk Oct 27, 2021
The mental health of contracted workers who fly in and out of Alberta’s oilsands compares poorly with that of the…

University of Alberta: Researchers confirm how to decontaminate and…

University of Alberta: Patients with rectal cancer who exercise while…

University of Alberta: Infections from respiratory viruses follow a…