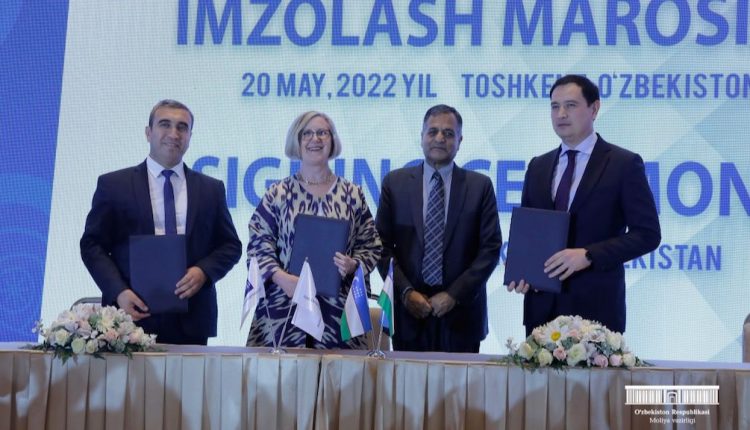 TASHKENT — The Asian Development Bank (ADB) will continue to scale up private sector investment in Uzbekistan’s urban and renewable energy sectors, and extend its support into new areas such as education and health, ADB Vice-President for Private Sector Operations and Public–Private Partnerships (PPPs) Ashok Lavasa told senior government officials during meetings in Tashkent.

“Uzbekistan continues to build a vibrant PPP program and ADB is fully committed to further supporting its development including in important service sectors such as solid waste management, wastewater treatment, district heating, and renewable energy generation,” said Mr. Lavasa. “These services are critical to improving the quality of life for people living in urban areas. I am pleased to report strong progress in two ADB-advised projects—the Tashkent District Heating Network and the Namangan Wastewater Treatment Plant—which have both now reached commercial close.”

Mr. Umurzakov, who is also ADB’s Governor, and Mr. Kuchkarov welcomed the bank’s continued support for Uzbekistan’s PPP program, as well as assistance provided by ADB in areas such as state-owned enterprise reforms.

In September, Tashkent City Municipality signed a 30-year PPP agreement with Veolia Energy Tashkent to upgrade, operate, and maintain the Tashkent District Heating Network, resulting in higher safety standards and savings of natural gas, energy, and water of between 25% and 40%.

The Namangan Wastewater Treatment Plant is Uzbekistan’s first water and wastewater PPP project. It will improve water quality in the Syr-Darya river while reducing greenhouse gas emissions through enhanced emission standards under a 25-year PPP agreement with Metito Utilities Limited. Leveraging from the learning of the Namangan Project, ADB plans to support a new wastewater PPP project in the city of Tashkent.

University of Oxford: Major boost for Oxford’s mission to…

ADB intends to expand support in education through new PPP projects to design, build, finance, and maintain new schools in Tashkent as well as new preschools across the country. ADB President Masatsugu Asakawa and President of the Republic of Uzbekistan Shavkat Mirziyoyev discussed these plans during Mr. Asakawa’s visit to Uzbekistan in March.

ADB is also aiming to extend its PPP support in Uzbekistan to the health sector and improve the quality of health care through new infrastructure and equipment, as well as improved service delivery.

Mr. Lavasa gave the opening remarks to a regional workshop for heads of PPP agencies from the Central and West Asia Region, during which he commended Uzbekistan’s remarkable PPP results and said the program could serve as an example for other developing countries.

Uzbekistan joined ADB in 1995. Since then, ADB has committed loans, grants, and technical assistance amounting to $10.4 billion for Uzbekistan. Supporting private sector development is a key strategic priority under ADB’s country partnership strategy for Uzbekistan, 2019–2023, which will help to move the country toward a vibrant and inclusive market economy.

University of Oxford: 50-year project reveals new insights about the evolution and…