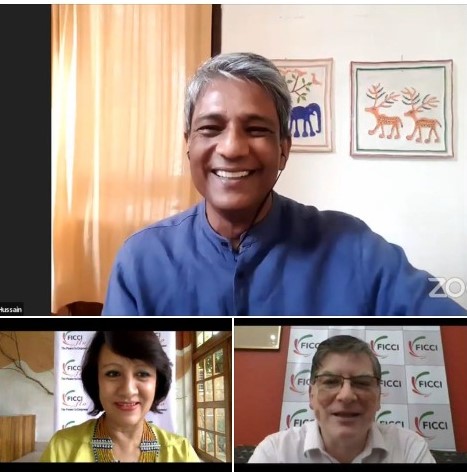 In conversation Adil said “Acting is all about embodying another personality and portraying it in front of a camera. If one focuses on the craft and goes deeper into the understanding the art of acting, the byproducts are inspirational. I have never aimed to be at the top but have always aimed to act well instead.”

He humbly put together on winning the Award by Norway government, “In India if you are outsider you can’t win a National Award, but I was surprised when Norway Government given me their award. Art should cross all boundaries and there should not be any restrictions”.

On Nepotism in Bollywood Adil said “It exists in every sphere of life, so does in Bollywood. If someone does not have merit and they are being pushed for certain advantages because they are from certain family then that is nepotism. In India we do not have the structure in place for the casting of a particular character unlike west which leads to nepotism to an extent”.

In a Q&A session with FLO members he expressed his keen interest in doing movies in Assam for which he is in touch with Rima Das and hopefully soon they will work together.

Jahnabi Phookan, National President FLO said, “FLO is the most apt platform to connect, learn and grow. We recognize and celebrate the success stories of inspirational personalities who break all stereotypes and are role models for others. Adil’s talent has truly transcended geographical boundaries and language barriers. We organized this interaction to learn more and be inspired by Adil Hussain’s journey from a stand-up comedian to a theater artist to an internationally acclaimed actor.”

Columbia University: HBCU Graduates and Others to Benefit from New…