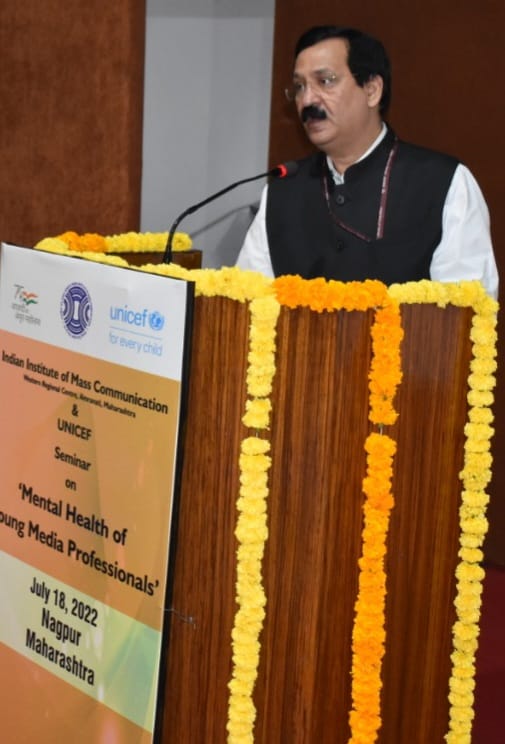 Nagpur : “When body and mind is neglected, health gets affected. To have a stress-free mind, it is essential for journalists to learn to adopt a healthy lifestyle,” said Prof. (Dr.) Sanjay Dwivedi, Director General, Indian Institute of Mass Communication (IIMC), here on Monday. He was speaking as a chief guest at a seminar on “Mental Health of Young Media Professionals”, organized by Amravati regional centre of IIMC in association with UNICEF at ICAR auditorium here.

Speaking further, Mr. Dwivedi thanked UNICEF for taking initiative on this important topic in collaboration with IIMC. He made it clear at the outset that the deliberations at the seminar were meant to crate hope in the minds of young journalists, and not to spread disappointment in them.

“Do not mix your life with your profession. Your profession is your means of livelihood whereas your life is far greater than that. When you return home from work, come back home as a father, brother, sister. Only then you will find yourself stress-free,” he told the gathering of journalism students from Amravati and Nagpur colleges.

“Disappointment often creeps in when the society does not respond to a journalist who, although egoistically, thinks that they are the voice of the society and are here to repair the world,” observed the IIMC DG, suggesting the students to, ”do your work well and stop worrying about the world. Don’t be a staunch idealist to spoil your own life, profession and family”.

Those who differentiate between life and profession live a longer life than those who do not, he said. “We ourselves are responsible for our health. So it is our responsibility to maintain it. We cannot blame others for it,” said Mr. Dwivedi adding, “health gets affected when body and mind become a victim of negligence.”

Mr. Dwivedi advised the young journalists to adopt a holistic approach to work, respecting the mind. “Do not think that you are someone special while working as a journalist. Instead, consider it as a work of service. Take rest after a certain time of work. Balance your routine to lead your life holistically. Find moments of leisure to spend time with family and friends. Establish respectful communication with them. This will help reduce the tension. Stress is manageable,” he said.

Stating that body is life a temple, Mr. Dwivedi advised to treat it the same way as we treat god in the temple. “Respect your body, think of what you eat and what you drink. Avoid the poisonous things. If your mind is healthy, your thoughts will be healthy,” he said adding that healthiness and positivity would not be there if there was stress. “We strive day in and day out for justice to society but it will not be good to do injustice with our own body at the same time,” he said. “We fight for the good and welfare of people. While doing so, we should also see to it that we also take care of ‘self-welfare’,” he said.

Mr. Dwivedi said that a journalist should do multi-tasking to bring diversity in their work culture. “The world will be beautiful if we resolve for it. Do not compromise with the profession for financial affluence. Think only of making the future better. Think only of making your life better by managing stress with available means,” he advised the budding journalists.

In his presidential remarks, Mr. Prakash Dubey said that fright, scare and disappointment are the three things that put young journalists under stress. He called for physical and mental check up of these journalists and their families too.

Earlier, Senior Journalist Mr. Umesh Upadhyaya said that journalists think as if they were the men who ran affairs of the world. “This puts them under stress,” he said. He said that in journalism there is more tension, depression and disappointment than any other profession and advised the gathering to learn to leave some of them. He said that journalists would be under less stress if they understood that their means of livelihood was not their life. He suggested making friends outside the field of journalism to relieve themselves of professional stress.

Prof. Kripa Shankar Chaubey said that reporters feel stressed because they have to do multi-tasking. Deadline pressure also adds to stress, he added. “Stress reduces creativity and also affects health,” he observed and suggested measures to fight with it.

At the outset, Mr. Dwivedi welcomed Mr. Prakash Dubey while Mr. Bharti and Prof. Rajesh Kushwaha welcomed other guests. A memento each was also presented to all the guests on behalf of IIMC, Amravati.