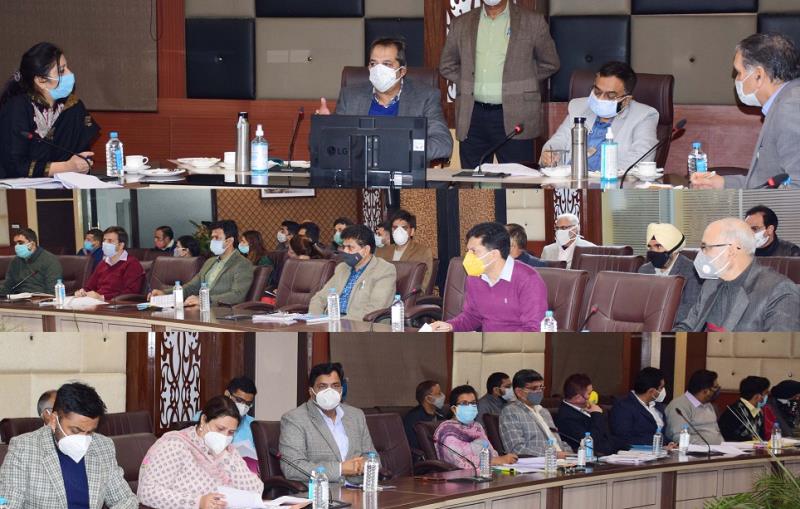 The meeting assessed the leading activities taken by the Jammu province for strengthening the investment ecosystem in the Union Territory of J&K.

Speaking on the occasion, the Advisor said that while we are ushering into a phase of industrialisation, we have to walk systematically and need to attract potential investors having a clear objective. He said that Jammu and Kashmir has a huge potential for holding viable industrial units and also said that there is a need to weed out sick units which are non-starters based on certain parameters.

He also passed on necessary instructions to the officers for better coordination with special emphasis on DIC centres asking them to be proactive. He also said that the issues confronting the department should be brought to the notice of the higher authorities and need to be addressed in a more purposeful manner.

Emphasising on strict adherence to the timelines, the Advisor said that all instructions passed need to be replicated on ground and follow up action should be taken accordingly.

The Advisor also emphasised upon the officers to prioritize the aspirations of the entrepreneurs besides asking them to pursue the pending court cases vigorously so that they are taken to its logical conclusion.

Director Industries, Jammu gave a detailed presentation outlining the current Industrial scenario including setting up of Industrial estates and major achievements of the department. She said that awareness programmes and webinars have been organised by the department in all districts of Jammu Division to highlight the benefits extended under JK Industrial Development Scheme.

She said that regular meetings with banks are being organised to create awareness for Atma Nirbhar Schemes among MSMEs. She also said that restoring industrial activities during initial Covid 19 period pandemic was a huge challenge and was done successfully. She also said that the Directorate in collaboration with MSME Technology Development Centre Meerut has got machinery installed in ITI, RS Pura for Skill up-gradation.