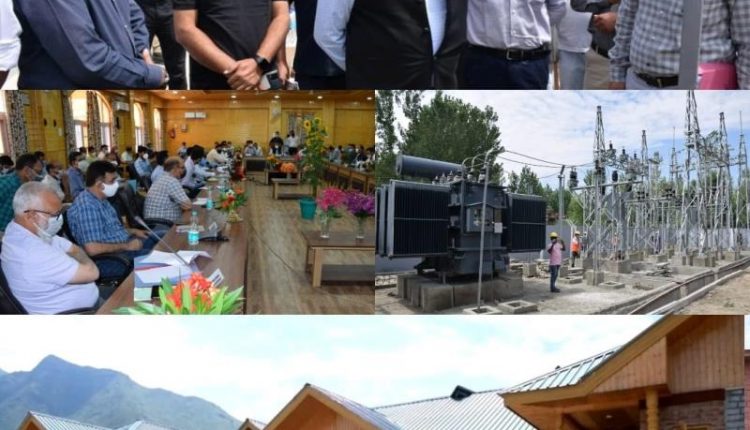 Advisor also met several public delegations who apprised him of their demands and grievances seeking an early redressal of the same.

He inaugurated Tourist Reception Centre near Wullar Vintage Park Garoora and reviewed infrastructure being developed in the district to boost tourism sector.

He directed the officers to establish a well equipped information centre for tourists so that TRC can facilitate tourists during their stay in Bandipora. The center shall provide information to tourists regarding trekking, tourism heritage, pilgrimage tourism and places of attraction in Gurez valley besides historical background of these places .

Advisor directed the officers of Tourism and Floriculture departments to come up with Detailed Project Reports regarding construction of view points and landscaping of parks along with fencing along the bank of Wullar lake. He asked them to prepare a comprehensive plan regarding inclusion of water sports activities as tourist attraction at Wullar lake.

Advisor said there is a huge potential of tourism in the district and directed the Directors Tourism and Floriculture to visit Bandipora regarding establishment of parks around Wular lake and exploring new tourist destinations in the district in consultation with DDC Bandipora.

Advisor also inspected under construction receiving station at Sumbal and asked the officers to expedite the pace of work on the project. He set a deadline of 30th September for completion of the project.

Advisor was informed that 238 works have been identified for inauguration and foundation laying in the run up to Independence Day celebration.

Reviewing Covid mitigation efforts, Advisor directed the officers to ensure 100 percent vaccination in the district besides stressing on preparing a meticulous plan to address any medical exigency.

Reviewing power scenario in the district, Advisor Khan directed the PDD officers to make preparations for upcoming winter season to ensure adequate electricity supply to the people. He said there should be no frequent power cuts or scarcity of transformers in rural areas and if required, transmission lines should be repaired before winters. He asked the officers to replace damaged poles, conductors and wires immediately as directed in the recently held meetings.

Advisor asked the officers to strictly follow District Disaster Management Plan and workout plan of readiness especially in the Gurez area and other higher vulnerable reaches. He directed them to take up flood protection works on Irn Nalla and along banks of streams and rivers in convergence mode with rural development and Irrigation department.

Advisor also interacted with several delegations who raised their problems and demands like renovation and up-gradation of several roads, promotion of water tourism in Wullar, bringing other tourist places on tourism map of UT, road connectivity, augmentation of electricity supply, improvement of healthcare facilities, construction of playfields in the district.

Advisor gave on spot directions to the Deputy Commissioner to identify land for playfields. He also asked the concerned departments for completion of ongoing works within time frame.

Advisor Baseer Khan said that government has empowered PRIs and they must use their powers to monitor the ongoing developmental works in their respective areas for effective results.

iednewsdesk Jan 19, 2022
From paper to practice, from university to your own business: Since 1999, a total of 147 spin-off companies have…