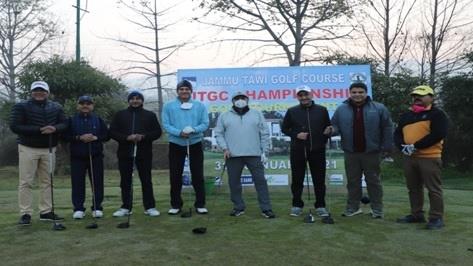 As many as 116 players participated in the day-long tournament, who were divided into 29 four-balls including 3 four balls of senior citizens and 1 four ball of children.

In children category, the award for best in Four ball went to Zorawar.

Later, Advisor Bhatnagar and Secretary Tourism presented trophies and mementoes to the winners, runner-ups and other players, who were adjudged best in different categories.

Congratulating the winners, Advisor Bhatnagar said that sports culture is evolving day by day in Jammu and Kashmir and young generation is seeing sports as a career now. He asked the officials to aware more and more people about such events.

Congratulating the winners, Secretary Tourism, Sarmad Hafeez stressed the need for inculcating golfing culture among the younger generation. He appreciated Secretary and management of JTGC for the successful conduct of the event. He said that such tournaments should be organized on a regular basis.