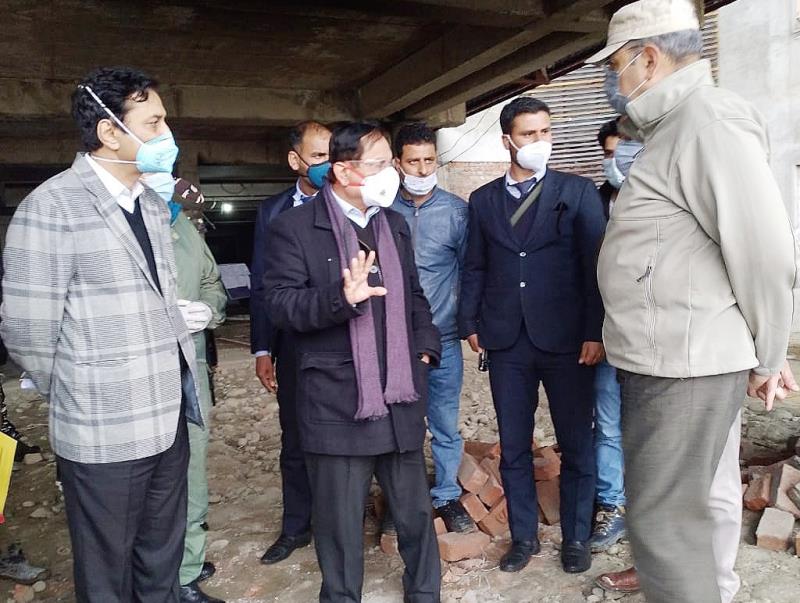 Reviewing the pace of work on several key developmental projects during the visit, Advisor Bhatnagar impressed upon the officers to work in synergy with each other to remove any difficulties coming in the way of progress of works.

Asking the executing agencies to expedite the pace of work on these projects, the Advisor stressed upon the officers for constant monitoring of these projects so that tangible results are achieved on the ground.

He directed the officers concerned to remove all the bottlenecks, if any, through coordinated approach with the Central as well as local agencies of J&K, so that the projects are completed within fixed timelines.

Advisor Bhatnagar also discussed the condition of the road network and the plan of action for the coming year during the meeting. He also physically inspected some of the road resurfacing work done last year and emphasised on the pot hole free project and the correct selections of road segments for resurfacing for the upcoming season.

He exhorted upon the officers to ensure quality and timely completion of all the projects being executed in the district.

The hospital is being constructed at an estimated cost of Rs. 116.25 crore and the execution work is being carried out by Public Works Department (R&B).

During the visit, Advisor Bhatnagar went round the hospital complex and inspected all the infrastructural works going on there besides other allied infrastructure. On the occasion, Superintending Engineer R&B presented a detailed outlay of hospital building before the Advisor. He informed the Advisor that the hospital is a G+4 structure equipped with all kinds of modern facilities.

The Superintending Engineer further informed the Advisor that the finishing works at the hospital were going on and are at the last stage of completion.

Advisor Bhatnagar directed the executing agency to expedite the pace of ongoing works at the hospital so that it can be dedicated to public for service delivery. He impressed upon them to handover the building at the earliest so that medical equipment procurements and other allied works could be done simultaneously.