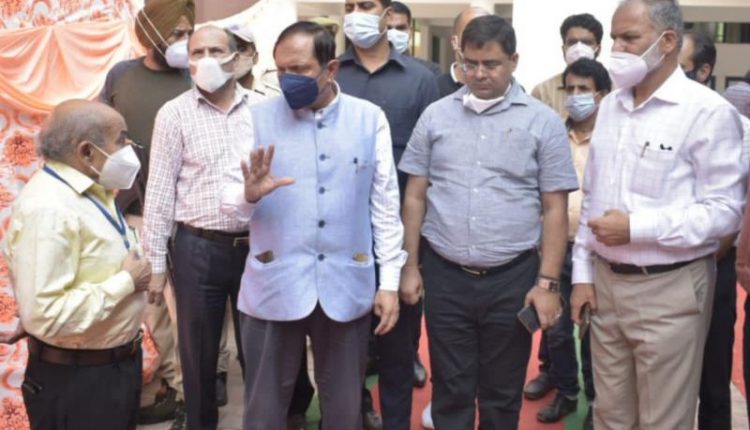 RAJOURI : Advisor to Lieutenant Governor, Rajeev Rai Bhatnagar today visited and chaired a meeting to review the developmental scenario of the district.

While reviewing the progress made under the District Capex Budget, the Advisor directed for ensuring that all the works are tendered at the earliest. He also asked the officers to prioritise those projects which can be completed in the current financial year.

Advisor Bhatnagar stressed upon the concerned officers to ensure the timely and judicious utilisation of the available funds and ensure that the works taken up under District Capex Budget are completed within the set deadlines.

Taking a review of the progress on CRF schemes being executed by the PWD sector and JKPCC, the Advisor asked the concerned officers to make sure that the targeted projects are completed on a priority.

While reviewing the performance of the PWD sector, the Advisor was informed that there are 35 schemes in Rajouri and Nowshera sub-divisions while as the work on Nine schemes is complete and 24 are under different phases of execution and two schemes on which the work has not been started yet.

About the works being carried out in Cities and Towns of the district by the PWD sector, the meeting was apprised that there are 54 schemes out of which the work on 22 is complete and 32 schemes are under progress.

Regarding the Power sector, the meeting was briefed about the progress achieved under the centrally sponsored schemes including IPDS, DDUGJY, PMDP-U and PMDP-R. While inquiring about the collection of revenue, it was informed that against the target of 100 crores, an amount of Rs. 30 crores has been collected as revenue as of now.

The Advisor directed the department to complete all the projects by the end of this financial year.

While taking a review of the PMGSY sector, the Advisor asked the concerned officers to speed up the pace on the projects and ensure that they are completed within the stipulated time frame. Besides, he asked them for completing all the SOS works by the end of the current financial year.

To avert the third wave, the Advisor asked the concerned officers to double the containment efforts to save precious human lives and ensure proper contact tracing to check the source transmission of the virus.

Inquiring about the medical oxygen supply and bedding capacity, it was apprised there are two oxygen generation plants of 1000 LPM capacity each and the bedding capacity is 500. About the progress on registration of beneficiaries under the SEHAT scheme, it was informed that nearly 75 Percent of the population of the district has been registered under the scheme.

The Advisor also inquired about how many beneficiaries have availed of the benefits of the scheme.

Reviewing the progress on COVID vaccination for the 18-44 age group, it was apprised that 70% of the population under the said age group has been covered under COVID inoculation.

It was also informed that there are several medical equipment that are beyond repair and should be auctioned. The Advisor assured that he would take up the matter with the concerned authorities.

About the Education sector, the Advisor took a comprehensive review of all the ongoing works and also set deadlines for completion of work on the projects.

While reviewing the progress achieved under MGNREGA, it was highlighted that as many as 2917 works were taken up in the current financial year out of which 342 works have been completed as of date. It was further informed that 4600000 person-days were generated last year.

Giving details of the progress under PMAY-U, it was revealed that 1530 houses were sanctioned under the scheme, out of which as many as 1061 were taken and the work on 411 is complete and 650 are under progress.

Under PMAY-R, against the target of constructing 30616 houses, the work on 8877 is complete in all respects. While reviewing the progress of works under B2V, it was informed that as many as 1207 works at the cost of Rs 38.18 crores were taken up under B2V1, B2V2 and B2V3 out of which 142 works have been completed and the rest are under different stages of execution. The Advisor said that the physical verification of all the works completed and being executed under the scheme should be carried out to assess the actual status on the ground.

Reviewing progress regarding the construction of bunkers, the meeting was informed that 3141 bunkers were sanctioned out of which the work on 2692 is complete in all respects and the rest are under execution.

Regarding the Jal Jeevan Mission, the meeting was told that 294 schemes at the cost of Rs 1298 crores have been sanctioned for the Nineteen blocks of the district and 380 villages are to be covered under the scheme.

Similarly, the Advisor also took a detailed review of all the developmental projects and schemes being implemented in the district one by one and passed necessary instructions to the concerned officers for putting in place dedicated efforts to complete all the works in set timelines and ensuring the proper implementation of the various schemes and programmes on the ground for the welfare of the general public.

He also directed the officers to work with integrity, commitment and make dedicated efforts to yield fruitful outcomes on the ground.

“Serving the people of the border and hilly district is a work of humanity and officers must work to their best level to provide necessary facilities at the doorsteps of the common masses”, the Advisor said.

The Advisor directed the officers to regularly pay field visits to assess the ground situation and act accordingly. He also asked them to take into consideration the utility and longevity of the projects.

He further asked the concerned officers to maintain quality while executing the work on the developmental projects and made it clear that no laxity shall be tolerated in this regard.

The Advisor also asked the officers for generating mass awareness among the public about several schemes and programs being launched by the Government for them and motivate them to avail themselves of the benefits of the same.