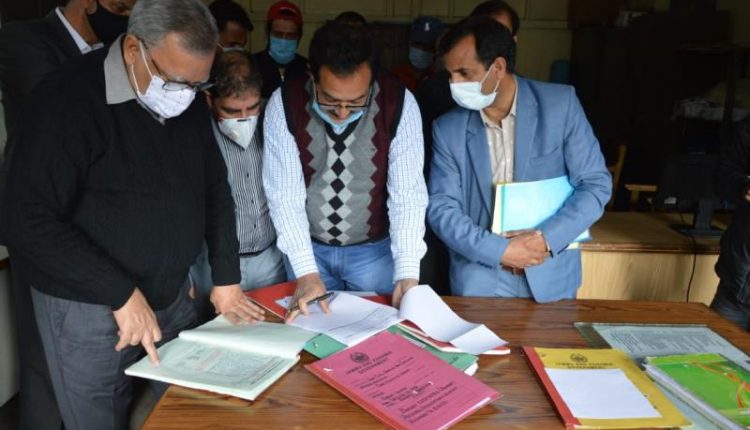 Srinagar: Advisor to Lieutenant Governor, Farooq Ahmad Khan today made a surprise visit to Directorate of Civil Supplies and Consumer Affairs during which he inspected the attendance of officers & officials, checked strength of staff, maintenance of official records, functioning of offices and efficacy of grievance cell.

During the visit, Advisor was accompanied by OSD, Mohammad Ashraf Hakak and other officers.

Advisor also inspected the office record files of various sections and directed concerned to maintain updated record besides switch to digital record keeping. He said that the record should be scanned and digitized for preservation and operation.

Advisor also checked the efficacy of grievance cell established in the office and redressal of the grievance thereof. Advisor was informed that grievance are received on daily basis through virtual communication besides individuals and delegations also bring grievance into the their notice.

He was further informed that all the grievances are being addressed at the earliest and the data is shared with the LG’s grievance cell.

Advisor Khan also enquired about the stocks of essentials available at various ration stores of the valley.

Advisor expressed concern for not utilizing the space and buildings to the optimum level. He said the extra space available needs to be put to better usage.

At the end, Advisor Khan stressed on the officers and officials of the department to work with due diligence and affection and emphasized on them to show accountability and transparency in operation of assigned responsibilities.

University of Reading: Reading tops UK for Agriculture in 2022 QS…