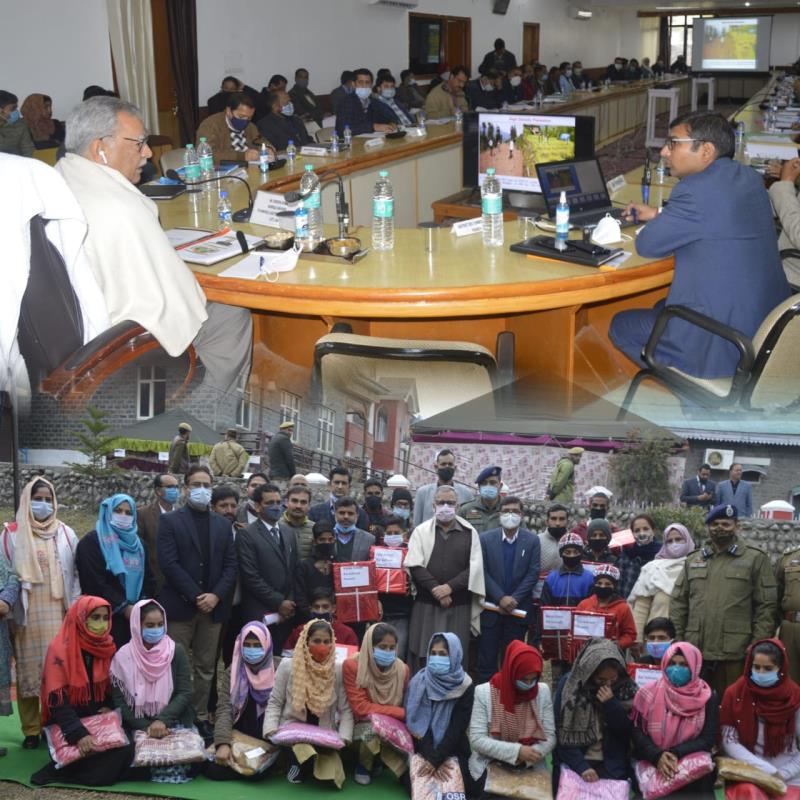 Poonch: Advisor to Lieutenant Governor, Farooq Khan, on Wednesday conducted an extensive tour of Poonch district and convened a meeting with the district administration to assess developmental scenario of the district.

Advisor also directed the officers to mobilize the field staff for prompt redressal of public grievances and effective implementation of different government schemes. He also stressed on timely completion of ongoing projects to avoid cost escalation.

DDC apprised the Advisor of various welfare schemes and programmes being implemented in the district besides highlighting physical and financial progress on various development works. He also apprised about several measures being taken up by the district administration to tackle with COVID19 pandemic and Bird Flu in the district.

Regarding construction of border bukners, DDC informed that out of 1388 bunkers being executed by the RDD and PWD in the district, 995 have been completed and the work on remaining is in different phases of execution.

16568 construction workers of Ramban District to get Covid…

Meanwhile, Advisor met with several public delegations and individuals and listened to their grievances and demands.

The delegation of Mandi demanded construction of Rajpura to Arai Mori road, Bedar to Chamberkanari road, Azmabaad to Dangari road, Mandi to Sathra road, Sathra to Kanal bridge, sports stadium and Girls Hostel for block Sathra besides up gradation of High School Sathra and adequate staff of doctors in block Sathra.

Issues raised by Surankote public included Anganwari Centre for block Bufliaz, development of tourism infrastructure, playground in Lassana, up gradation of PHC in Surankote A, Boys and Girls Hostel in Surankot A, regularization of daily wagers and construction of court building.

Advisor gave a patient hearing to all the issues and demands raised by the public and passed necessary directions to the concerned authorities for redressal of the same in a time bound manner.

Advisor said that the LG administration is working 24/7 to ensure that all the basic facilities in terms of food, health, water, power supply, roads are provided to the common masses in an efficient manner. He also made the public aware about various welfare schemes and programmes launched by the government.

Meanwhile, Advisor released funds to Building and Other Construction Workers under Lower Education Assistance and Rs 12.30 lakh to dependents of six cases under death and funeral scheme.

Video lectures of Karelian scientists for library readers: to the 100th anniversary of the Republic of Karelia