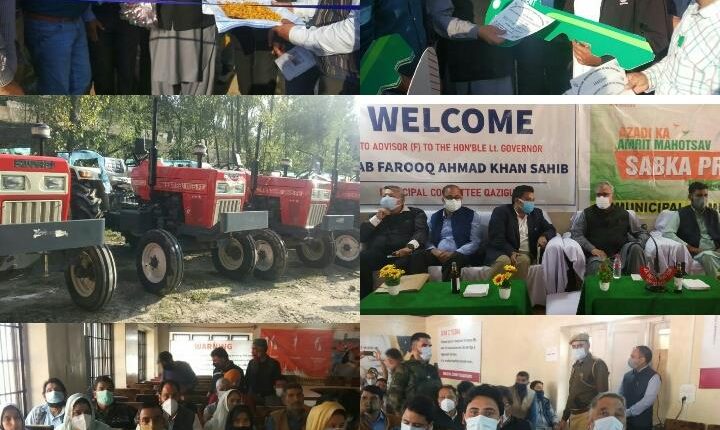 ANANTNAG : Advisor to Lieutenant Governor, Farooq Khan, today visited Qazigund and assessed the status of development projects being executed in the area.

The Advisor was accompanied by Director Agriculture, Kashmir and Director Horticulture Kashmir besides other senior officers.

Advisor met several delegations of PRI members, Councillors of Municipal Committee Qazigund, local trader and Auqaf associations besides prominent citizens of Qazigund and listened to their demands and grievances.

The delegations put forth various demands related to development and welfare of their respective areas. Their issues included enhancement of PMAY targets, completion of works under 14th Finance Commission grants and District CAPEX plan, issuance of ST certificates to ensure benefits to genuine beneficiaries under FRA 2006, development of playgrounds in panchayats and town areas, installation of street lights in Qazigund town and national highway, upgradation of infrastructure at panchayats and tehsil offices, etc.

The delegations also appreciated the district administration and district police for their sustained fight against the drug menace.

Deputy Commissioner, Anantnag, Dr Piyush Singla, informed the Advisor that the administration is fully committed to fast pace development in the district. He informed that Anantnag has already achieved 80% of its yearly target under MGNREGA.

Advisor, while speaking on the occasion, assured all the delegations of timely resolution of their grievances.

He directed the officers to take PRIs onboard in planning and execution of projects for effective results.

Advisor Khan, while talking about tribal development plans for the district, informed the participants that the plans are being finalized and demands of tribal people will be addressed soon.

Advisor laid stress on need for coordination between PRIs and district administration to ensure timely execution of approved works.

Khan also reviewed the functioning of various government departments in the district. He directed the officers that while ensuring timely completion of works, there should be no compromise on the quality of works.

Advisor also interacted with delegations of fruit growers from Kulgam and Pulwama districts.

They apprised the Advisor of their issues related to transportation and marketing of their produce.

Advisor directed the district officers to ensure these issues are resolved. He underlined the need for cooperation between fruit growers and district administration for streamlining production and distribution of the produce.

He distributed 8 tractors among beneficiaries under CAPEX budget, 4 each from Anantnag and Kulgam.

To encourage prticipation of females in agricultural activities, 5 mushroom units were also provided to female farmers from Kulgam.