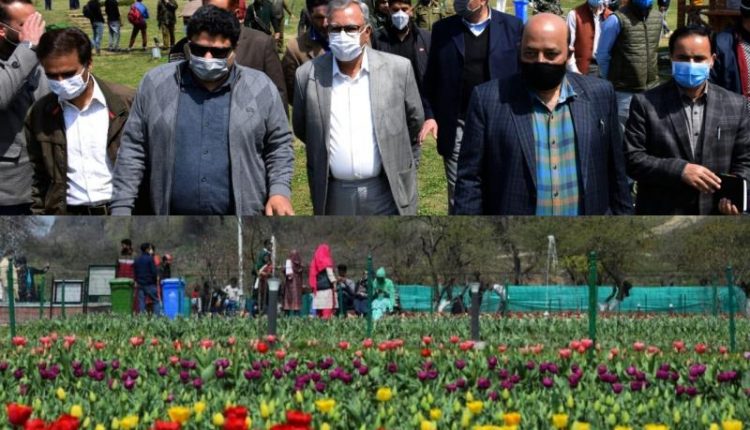 Srinagar: Advisor to Lieutenant Governor Farooq Khan today visited Tulip Garden and took stock of arrangements in place there with regard to Tulip Festival.

Advisor was apprised by the concerned official that the garden is spread over an area of about 30 hectares and has over 15 lakh flowers of more than 64 varieties in bloom.

The official informed that apart from tulips, many other species of flowers like hyacinths, daffodils and ranunculus have been added to enhance the grace of the garden.

The Advisor was also apprised that Tourism Department has planned a cultural programme at the garden in the first week of next month as part of the beginning of the new tourism season in the Valley.

He was further apprised that Tulip garden was opened in 2008 with the aim to boost floriculture and tourism in Kashmir valley. Advisor said that Tulip Garden has become iconic tourist destination and attraction for the tourists.

Advisor impressed upon the officials to maintain provisions of world class services to the tourists. He also praised the Floriculture and Tourism Department for putting restless efforts in maintaining the beauty of the garden.

Advisor asked the concerned officials to put in place adequate measures to ensure the implementation of the standard operating procedures to contain Covid-19 in letter and spirit and added that no visitor would be allowed to enter the garden without the face masks .

Advisor Khan also interacted with the visitors and tourists from outside the UT who were mesmerized by the beauty of the garden. He asked them to promote the garden outside Jammu and Kashmir and also be an ambassador for promotion of other tourist places of J&K.

The Advisor later visited badamwari and interacted with Tourists & locals there.