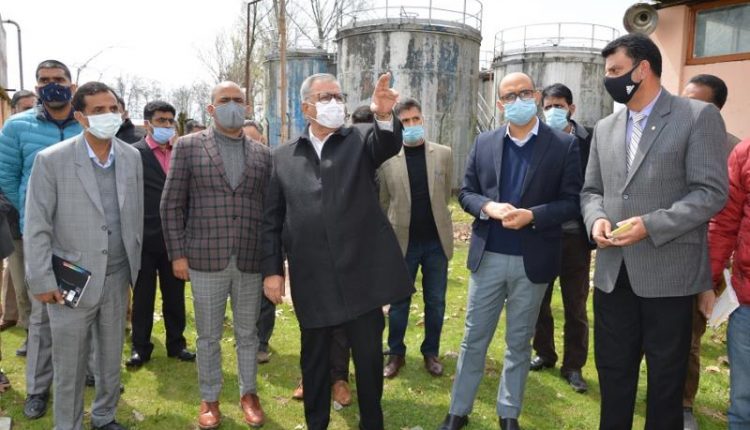 Sopore: Advisor to Lieutenant Governor, Farooq Khan today visited Fruit Mandi Sopore where he met various fruit growers and other stakeholders who apprised him about their issues and demands.

On the occasion, President of Fruit Growers Association Sopore, Fayaz Ahmad Malik apprised the Advisor about issues of the area viz drinking water facility in the fruit mandi; completion of Bagh-e-Sundri Road; mechanism to protect local farmers as fruits especially from Iran are entering the Indian markets without proper tariff etc.

The President of the Association also demanded proper accommodation for fruit growers at mandi, testing lab for controlling spurious pesticides, land acquisition for the expansion of fruit mandi, establishment of cold storage, crop insurance among other demands of vital significance.

While reiterating that farmers’ welfare is among the top priority of the present government, the Advisor said that every possible initiative is being taken to protect the interest of farmers.

He assured that all the genuine demands would be taken for their timely redressal, adding that a proper mechanism would be formulated wherein effective grading and packaging system of fruits shall be introduced in order to control erratic price fluctuation of horticultural produce.

The Advisor maintained that the government is working on the up gradation of basic infrastructure in fruit mandis so as to make them at par with standards of international fruit markets.

Advisor Khan directed for inspection of pesticide dealers to be followed by strict legal action if anyone found involved in the sale of sub-standard pesticides and fertilizers.

Meanwhile, several other delegations called on the Advisor and put forth their issues and demands before the Advisor.

The delegations demanded Indoor Sports Stadium for Sopore, establishment of University Campus at Sopore, placement of officers in government offices wherein positions have been left vacant, completion of CHC Dangiwacha, establishment of mother and child care hospital in the area, uninterrupted power supply besides other issues of public importance.

The Advisor gave a patient hearing to all the visiting deputations and assured that necessary action would be taken for their timely redressal.

Earlier, the Advisor accompanied by the concerned officers inspected a government- run Apple Juice Plant situated at Mazbug area of Sopore where he took first hand review of its functioning.

The Advisor inspected various aspects associated with the Juice Plant wherein he directed to strengthen employment oriented activities in the Plant so that more and more unemployed youth are motivated to take up entrepreneurship as a career option.