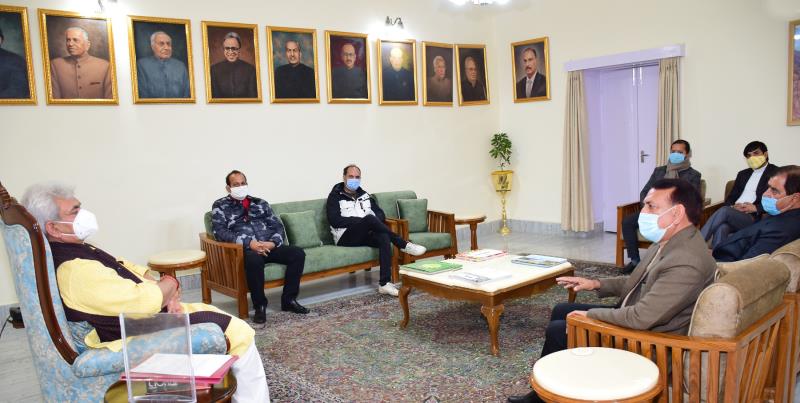 The Lt Governor was briefed about the status of various important legal matters pending before different forums, including the Supreme Court of India, the High Courts of Jammu & Kashmir and the tribunals.

The Lt Governor emphasised the need for speedy justice for the poor and the needy and advised the Law Officers to avoid unwanted delay in disposal of cases. The Law Officers were also guided to render best possible legal assistance to the poor to ensure quick justice delivery.

The Advocate General, on behalf of all the Law Officers, assured the Lt Governor that his directions would be followed in letter and spirit.

Meanwhile, a public delegation led by former Minister, Sh. Jugal Kishore Sharma called on the Lt Governor and apprised him of various developmental issues of Katra and Reasi area, including development of tourism sector, welfare of local business unit owners and other issues of public importance.

The former Minister also drew Lt Governor’s attention towards the issues of the mining sector.

The Lt Governor, while interacting with the delegation, observed that the UT Government is taking several measures for development of religious and tourist destinations and welfare of all the stakeholders. He assured the members of the delegation that all their genuine concerns projected by them would be addressed on merit.