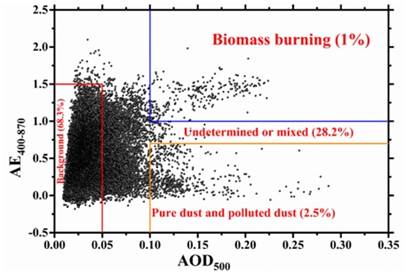 New Delhi: Researchers at the Aryabhatta Research Institute of Observational Sciences (ARIES), Nainital an autonomous research institute under the Department of Science and Technology (DST) Govt. of India have found that aerosol radiative forcing larger than the global averages, implying some amount of radiative effects, in spite of the clean atmosphere over the trans-Himalayas. The paper under publication in the journal Science of the Total Environment shows that monthly-mean atmospheric radiative forcing of aerosols leads to heating rates of 0.04 to 0.13 C per day. Further, the temperature over the Ladakh region is increasing 0.3 to 0.4 degrees Celsius per decades from the last 3 decades.

The atmospheric aerosols play a key role in the regional/global climate system through scattering and absorption of incoming solar radiation and by modifying the cloud microphysics. Despite the large progress in quantifying the impact of different aerosols on radiative forcing, it still remains one of the major uncertainties in the climate change assessment. Precise measurements of aerosol properties are required to reduce the uncertainties, especially over the oceans and high altitude remote location in the Himalayas where they are scarce.

The study led by Dr. Umesh Chandra Dumka (Scientist, ARIES, Nainital, India) along with contributions by Dr. Shantikumar S. Ningombam (Scientist, IIA, Bangalore, India), Dr. Dimitris G. Kaskaoutis (Scientist, National Observatory of Athens, Greece), Dr. B. L. Madhavan (Scientist, National Atmospheric Research Laboratory, India) and other team members analysed the variability of aerosol optical, physical and radiative properties from January 2008 to December 2018 and the role of fine and coarse particles in aerosol radiative forcing (ARF) assessment. ARF is the effect of anthropogenic aerosols on the radiative fluxes at the top of the atmosphere and at the surface and on the absorption of radiation within the atmosphere.

The observations of the scientists show that the aerosol optical depth (AOD) exhibited a distinct seasonal variation with higher values (0.07) in May and lower (0.03) in winter months. The lower values of Ångström exponent (AE) in spring indicated dominance of coarse-mode dust aerosols. An aerosol classification based on FMF and SSA revealed a dominance of medium-sized mixed aerosols over the Hanle and Merak, especially in Spring (53%). Pure and polluted dust exhibited fractions between 16% and 23%, with a low frequency of less than 13% of absorbing aerosols, denoting weak influence of anthropogenic aerosols and Black Carbon over the trans-Himalayan sites. Further, the aerosol radiative forcing ARF values at top of the atmosphere were mostly low (-1.3 Wm-2) over Hanle and Merak.

“A deep scientific study of aerosol generation, transport, and its properties have important implications in our understanding and mitigation of climate change via atmospheric warming, which among many things, impacts the snow and glacier dynamics over the trans-Himalayan region,” said Prof Ashutosh Sharma, Secretary, DST.

The results from the study can help better understanding the aerosol optical and microphysical properties and improving the modelling of aerosol effects in view of aerosol-climate implications via modifications in atmospheric warming and changes in the snow/glacier albedo over the trans-Himalayan region.

Measurements of aerosol optical and microphysical properties started during the last decade at the Indian Astronomical Observatory (IAO) at the high altitude background sites of Hanle and Merak in the trans-Himalayas under the frameworks of Aerosol Radiative Forcing over India (ARFI) and Astronomical Site Survey program of Indian Institute of Astrophysics (IIA), Bangalore. In addition to this, few in-situ measurements of carbonaceous aerosols and ionic species have also been performed at Himansh Observatory (Spiti Valley) in the western Himalayas.

The transport of light-absorbing carbonaceous aerosols and dust from the polluted Indo-Gangetic Plain and desert areas over the Himalayas constitutes a major climatic issue due to severe impacts on atmospheric warming and glacier retreat. This heating over the Himalayas facilitates the “elevated-hat pump” that strengthens the temperature gradient between land and ocean and modifies the atmospheric circulation and the monsoon rainfall. A better understanding of the aerosol optical and microphysical properties through the study can improving the modelling of aerosol effects in view of aerosol-climate implications via modifications in atmospheric warming and changes in the snow/glacier albedo over the trans-Himalayan region.

Boost to enhance telehealth experiences for patients and doctors