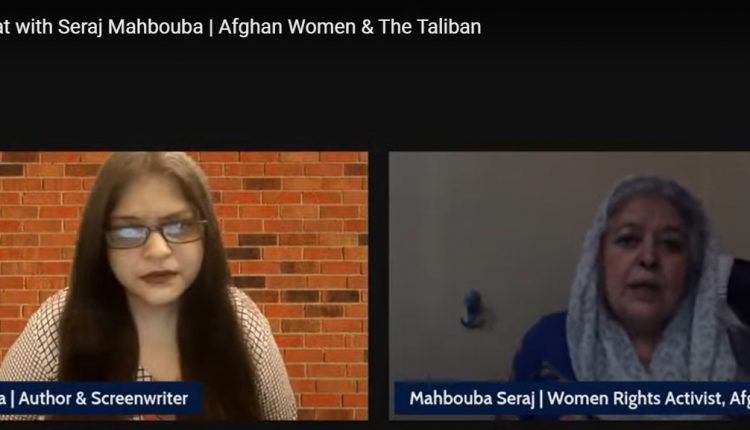 New Delhi: Prabha Khaitan Foundation in association with Kahalli hosted a live conversation on YouTube channel in its special edition “Tete-A-Tea”. Author and Screenwriter, Advaita Kala was in conversation with Seraj Mahbouba, Women Rights Activist, Afghanistan, who joined from Kabul.

The conversation discussed the prevailing conditions in Afghanistan. Advaita Kala started the session with introducing the Prabha Khaitan Foundation (PKF) as a women centric organization who work and socially engage with it audience and also are very concerned about what happens within the female experience, not only in India but also publicly across the world and in countries like Afghanistan which is the center of focus at the present time.

Speaking on the present circumstances right now in Kabul and Afghanistan, Seraj Mahbouba, Women Rights Activist, Afghanistan explained the situation to be grim. She said, last night they had a huge firing in the air which is being talked about. It was extremely scary. First time they fired on the 31st of August, this is the second time. I still don’t know the reason why it was done. Although today there were some very stern words said by the higher echelon of the Taliban to everybody who did that to not do this thing again; because, of course, apart from the fact that it’s a waste of bullets and its expensive; all of the ammunition that they have actually belongs to the Afghanistan Government and is not to be played with and just fired in the air. Yet it was extremely scary for everyone, the kids were absolutely petrified, and people who are sick – all the noise really upsets them very much; and at the end of the day there were about 17 deaths and 44 or 46 injuries.

She further said, today the women demonstrated peacefully on the street against the Taliban that why won’t they allow the women to be a part of the government. They were just a few women just asking for their rights. They were hit; and one of them actually got a bloody head.

She said because of the position of Women Rights Activist she would like to talk to the Taliban, and get a clarity about what they are up to.

She emphasized her concern that Afghanistan at present does not have a government, we still don’t have our banks open so there’s no money, there’s no work, women still are not going to work, universities are not open, schools are not open completely. Afghanistan is heading towards anarchy.

She requested the people of Panjshir to stop and just hope that they understand that this is not the way to go about solving this problem. More killing is not the answer for Afghanistan.

She added that countries like India as a neighbor with so much closeness and who have helped Afghanistan so much should have taken a strong stance.

On the odds of the Taliban engaging with people like her, she said, I really don’t know and I have no idea whether they will or not want to, but I’m just hoping. If the Taliban does not listen to the people while forming the government then she fears the country will be going into the cycle of violence, the cycle of killing, the cycle of a civil war in the country that is not going to end in another 50 years.

Seraj who is in her 70s now said this kind of fighting and killing in Afghanistan has been going on since 1978.

Further speaking Seraj said, a famine is coming because it was a very dry year last year, economically we are really in a very bad place, and we don’t have enough food.

She said that the people were not expecting the arrival of the Taliban so fast.