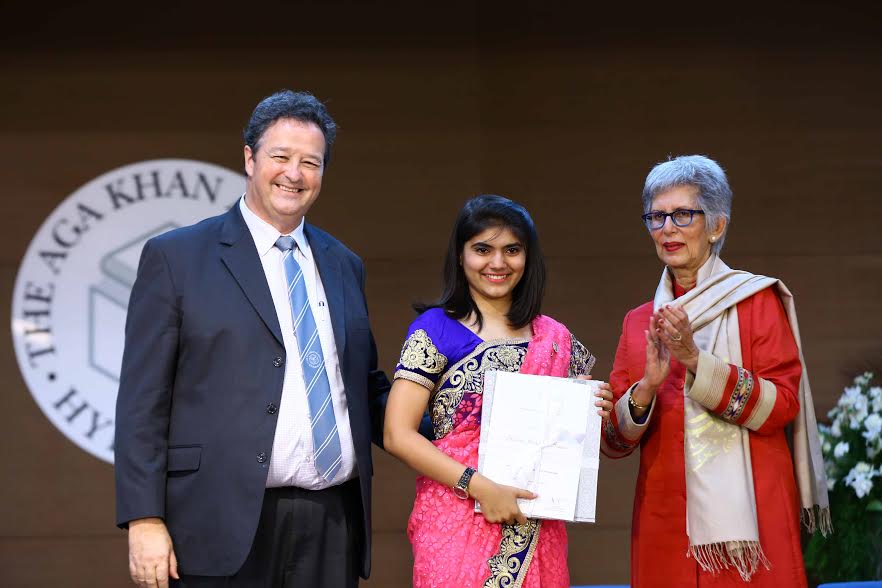 Hyderabad: The fourth Graduation Ceremony of 69 students of Grade 12 of The Aga Khan Academy Hyderabad held here in city at its premises near Rajiv Gandhi International Airport on Saturday.

H.E. Mrs. Nurjehan Mawani, Diplomatic Representative to His Highness the Aga Khan in Afghanistan graced as the Chief Guest.

Addressing the passing out students, H.E. Mrs. Nurjehan Mawani told them to be an ambassador for the academy, its values and what it represents. Life’s journey will be filled with unlimited opportunities, possibilities and both favorable and unfavourable winds under your wings.

The World that you want to help build and create will help you navigate your choices Surround yourself with people whose outlooks are not restricted by physical boundaries – be aware of the failure of pluralism, she said

Graham Ranger, the network’s new Academic Director has flown in from Paris for the occasion.

The mission of the Academies, Geoffrey Fisher said is to raise ‘homegrown leaders’ through service and stewardship who will make positive contributions to their future society and change outcomes across the developing world.

The Academy places strong emphasis on integrating technology into classroom learning as a leading Indian Microsoft Showcase School. It is also the only school in Hyderabad to have received the IGBC Platinum Rating Certification, making it a pioneer in the national Indian green schools movement.

The highlight was the ceremony live streamed to the sister Academy in Mombasa in Kenya as well as Afghanistan to include parents and families of students currently at the Academies in both countries.

The 2017 Graduation Ceremony marks the culmination of a significant Academy experience. Graduates will join the growing number of Academy alumni who have achieved remarkable success in both Academy results and university placements. Alumni scholarship awards are notable, valued at approximately $11.7 million across four graduating cohorts.

The school is located in 100 acres campus and has 5 lakh square feet built up area. The Academy in Hyderabad now educates 650+ students from 5 years to 18 years offering world class facilities. It is part of a global network being established in 14 countries across Africa, South and Central Asia, and the Middle East. The Academies are part of AKDN (Aga Khan Development Network), the world’s largest private development organization.

AKDN contributes more than 6.5 billion USD to projects in 30+ countries to address the big global problems of poverty, health, education and heritage challenge

With a curriculum explicitly designed to develop leadership through a values framework of five strands: ethics, pluralism, cultures and heritage, governance and civil society, the Academy places strong emphasis on integrating technology into classroom learning as a leading Indian Microsoft Showcase School. It is also the only school in Hyderabad to have received the IGBC Platinum Rating Certification, making it a pioneer in the national Indian green schools movement.

Celebration of the International Day for Biological Diversity on Monday, 22nd May 2017 at Science City