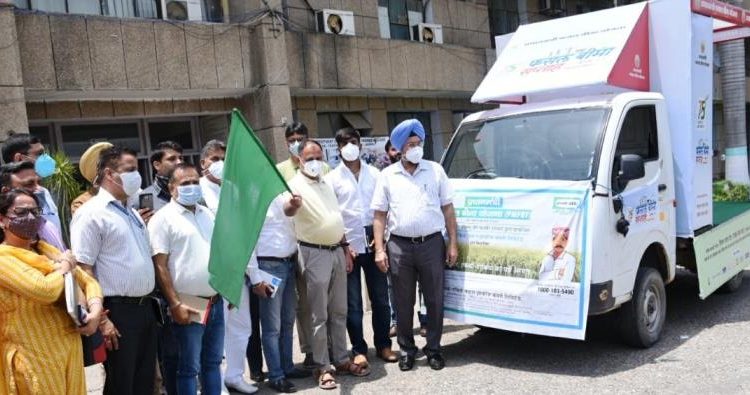 The purpose of celebrating Crop Insurance Week is to create awareness and enhance enrolment of the farmers under the Insurance scheme. An Intensive campaign in this regard is being held in all the districts including specially identified 75 Blocks of 75 Districts where penetration of crop insurance is low.

The van campaign was organized by IFFCO TOKIO Insurance Company in collaboration with the Department of Agriculture & Farmers Welfare, Jammu under Pardhan Mantri Fasal Bhima Yojna (PMFBY) to inform farmers about the PMFBY scheme.

Speaking on the occasion, the Director AP & FWD informed that this ICE (Information, Education & communication) Van will cover four districts of UT viz. Jammu, Samba, Udhampur and Anantnag during the crop Insurance week to disseminate the concept of Pradhan Mantri Fasal Bima Yojana and its benefits among the farming community.

The Director underscored that the Fasal Bima Yojna will go a long way in mitigating the financial risk of the farmer suffering from the crop losses and aid in stabilizing the farmer’s income. This will also ensure flow of credit in the Agriculture Sector. Department is striving hard to bring more and more farmers under Fasal Bima Yojna diring the week w.e.f. 1st to 7th of July, 2021.