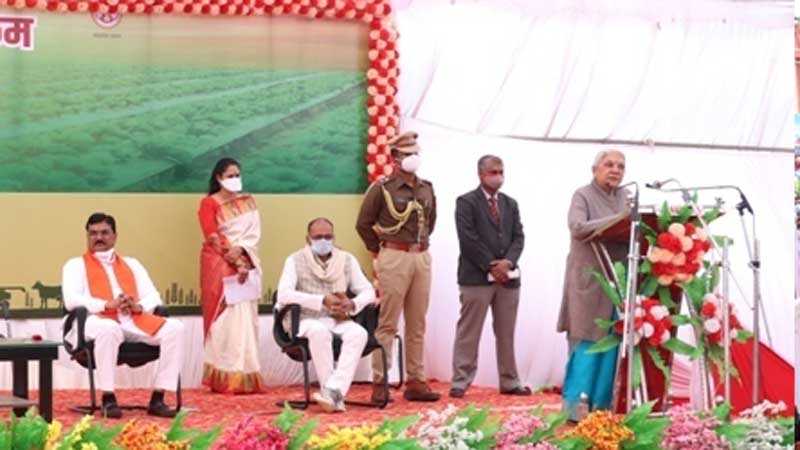 Bhopal : Governor Smt. Anandiben Patel said that agriculture universities must volunteer to supply organic inputs. Agricultural universities should implement the action plan to provide organic seeds, fertilizers and pesticides to farmers. She said that the need to supply organic inputs to farmers should be sorted out and supply should be arranged accordingly in the next two-three years. She told the scientists of Krishi Vigyan Kendra to ensure production of improved organic food grains, fertilizers and pesticides by farmers so that other farmers from nearby areas also get motivated. Smt. Patel was addressing farmers at the Organic Advanced Agriculture Programme held at Panwarkheda in Hoshangabad today. Minister for Farmer Welfare and Agriculture Development Shri Kamal Patel was also present on the occasion.

Governor Smt. Patel said that the products produced by using chemical fertilizers are very harmful for health. He said that if figures are to be considered, the number of people dying from cancer will be more than the deaths caused by any other infection. She said that efforts should be made with integrated vision for development. Successful production of organic manure, pesticides and nutrients from cow dung is being done in Gujarat. In Uttar Pradesh too, the project to produce organic products from cow dung of 10 thousand cows has begun. She stressed the need for integrated efforts for development She said that work is done in the villages aimed at integrated development, many problems will be solved. Citing the example of the problem of malnutrition, she said that if farmers start giving some vegetables in anganwadi and mid-day meal then children will start getting nutritious food. She said that children are the future of the country. Special attention will have to be paid to the health of women and girls because a healthy mother will give birth to a healthy child. She laid special emphasis on self-reliance of women for their empowerment and said that women self-help groups are a successful way to attain this. Governor Smt. Patel visited the exhibition of organic agricultural products at the programme venue and after interacting with the farmers, motivated them to sell their products by increasing its value. While appreciating the quality of organic products she encouraged them to sell their products at maximum retail price (MRP) instead of minimum support price (MSP).

Minister for Farmers Welfare and Agriculture Development Shri Kamal Patel said that Prime Minister Shri Narendra Modi has made farmers self-reliant. They have the right to sell their crop at maximum retail price (MRP), not the minimum support price (MSP). He said that till now there were many productive farmers, but due to few buyers, they could not get the right price for the crop. Now the farmer himself can sell his produce. He can get maximum retail price by forming a foodgrain producers association. He said that after 70 years of independence from the Swamitva Yojana, farmers are getting the right to free land. Now he too can establish his own business by taking loans from banks on the basis of his property. Shri Patel said that the indiscriminate use of chemical inputs has rendered the soil poisonous. Serious diseases like cancer are a byproduct of this. He said that the land needs to be treated. Therefore, in all agricultural science centres, OPDs will be run for land treatment during office hours. Agriculture scientists will visit villages and will advise farmers through chaupals, for which a toll free helpline will also be launched. He said that organic farming is the basis for a secure future for future generations.

Vice Chancellor of Jawaharlal Nehru Agricultural University, Shri P.K. Bisen said that the Panwarkheda Agriculture Research Centre was established in the year 1903. During this period, 53 advanced varieties of wheat were invented by the centre. Urging the farmers not to burn Narwai, he said that by obtaining bio-digester from the centre, the Narwai can be converted into organic manure in 15 days.

Applicant will get public services automatically within the stipulated time: CM Chouhan

Martyr Bhima Nayak’s sacrifice will continue to inspire to be dedicated to the nation: Chief Minister Chouhan