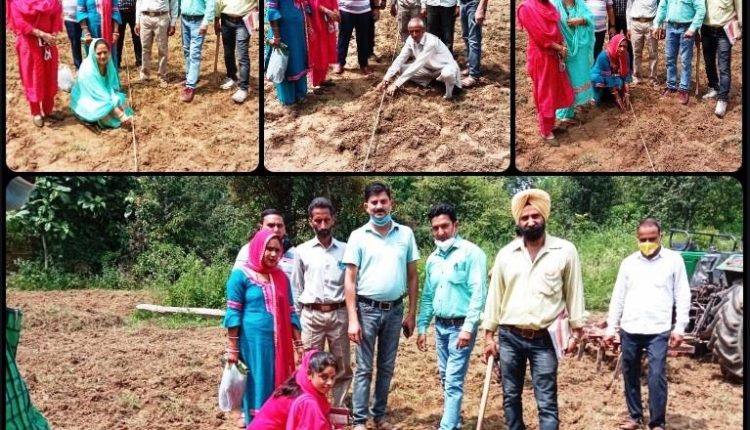 UDHAMPUR : A day long farmers’ awareness program regarding on field introduction and promotion of Lemon grass was organized by department of Agriculture and Farmers’ Welfare Udhampur here at Village Lehnu of District Udhampur.

A unique initiative has been taken jointly by the Department of Agriculture& farmers’ welfare, Udhampur in collaboration with Indian Institute of Integrated Medicine (IIIM) Jammu for promotion of Lemongrass cultivation to benefit the farmers.

At the onset, Sanjeev Gupta, Project officer, Lemon grass gave a detailed deliberation on the package & practices to be adopted for the cultivation of lemon grass and its useful benefits.

During the camp, the participants were advised to switchover to cultivation of Lemon grass on the land that has been kept fallow due to monkey menace as monkeys do not feed on lemongrass. This will overcome the dent that monkey menace has caused to their income, they were told.

They were apprised that the lemon grass cultivation will help in income generation by means of extracting lemon grass oil and other processed products like incense sticks that are in high demand in the market. Lemon grass oil is also believed to be one of the disinfectants, anti-fungal, anti-viral, immunity booster and is used for multi-purpose tasks. Besides, Lemon grass requires very less investment of labour and money as compared to cultivation of other crops. Farmer from Lehnu village, Tikri, Surinder Kumar, also shared his practical experience.

The interested farmers were provided free saplings for sowing in their fields. In the first phase, 2,00,000 saplings were distributed through DDC Ashu Sharma, BDC Nisha Sharma & Sarpanch Lalita, to cover an area of approx 3 Ha. Subash Chander Sharma, Chief Agriculture Officer, & Alok Pandotra, District Agriculture Officer, interacted with the farmers & gave answers to their queries raised during the interactive session.

iednewsdesk Apr 11, 2022
Professor Pawan Budhwar has been named by the International Federation of Scholarly Associations of Management…