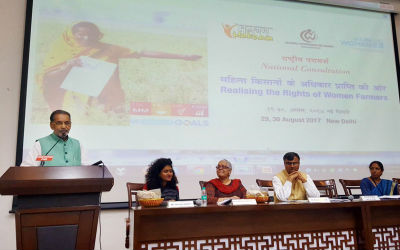 New Delhi: Union Agriculture and Farmers Welfare Minister, Shri Radha Mohan Singh said that through its mandate, goals and objectives, the Ministry is trying to ensure that women become part of the mainstream agriculture, reap the benefit of every penny spent on agriculture and contribute to agricultural productivity and production and in doubling the income of their families. Shri Singh said it today at the “Securing Rights of Women Farmers: Developing a Roadmap for Action” event, organized at the Constitution Club, New Delhi, by the National Women Commission in association with UN Women and Mahila Kisan Adhikaar Manch (MAKAAM).

Shri Singh said that the participation of women in agriculture is well known. According to NSSO (National Sample Survey Office) survey, a decline in both male and female labour force in agriculture has been observed in the last three decades. The number of men in agriculture has decreased from 81 percent to 63 percent, and women from 88 percent to 79 percent. This so because deterioration in the number of women is significantly lower than the men and this can be easily called the feminization of agriculture. Union Agriculture Minister said that rural women’s contribution to the economy of the majority of the developing nations including India is vital. 80% financially independent women are engaged in farm-related activities in India. Out of them, 33% are working as agricultural labourers and 48% are self-employed farmers. According to as per NSSO report, women lead almost 18% agricultural households and there is not a single area of agriculture in which they are not involved.

Agriculutre Minister said that the female labourers are facing several inequalities. For instance, the work much longer hours than men and are paid lesser than their counterpart. Also, their ignorance about their rights, opportunities and facilities make their participation in agricultural all the more tougher. Having said that, women play multi-dimensional roles in agriculture – from sowing, harvesting, applying fertilisers, irrigation, plant protection to weeding, storing etc – they do it all while shouldering household chores like cooking, storing water, collecting fuel wood, maintaining the house, etc. Shri Singh said that apart from this, women are active in other agriculture related activities like cattle management, fodder collection and allied activities related to dairy and agriculture such as beekeeping, mushroom farming, pig farming, goat rearing, poultry etc.

The Ministry’s initiatives to bring women into mainstream agriculture.

The following measures have been taken to bring women in the mainstream agricultural sector:

I. Earmarking at least 30% of the budget allocation for women beneficiaries in all ongoing schemes/programmes and development activities.
II. Initiating women centric activities to ensure benefits of various beneficiary-oriented programs/schemes reach them.
III. Focusing on women self-help group (SHG) to connect them to micro-credit through capacity building activities and to provide information and ensuring their representation in different decision-making bodies.
IV. Last year, the Ministry of Agriculture and Farmers Welfare decided to celebrate 15th October of every year as Women Farmer’s Day. This marks a significant step forward in women empowerment.