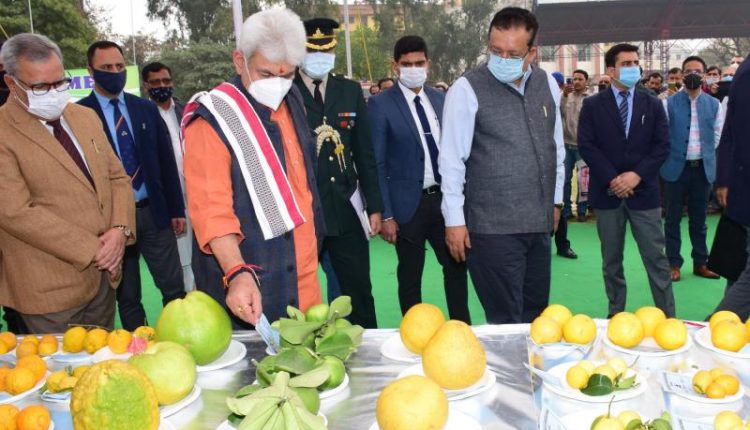 Jammu: Agriculture sector will get more share of the Jammu and Kashmir’s budget component in future. A unique Sustainable Agriculture Plan has been developed in J&K, which currently caters to all developmental needs without compromising future potential.

Lieutenant Governor, Manoj Sinha made these remarks during the Horti-Expo 2021 here at Police Auditorium, Gulshan ground.

Speaking on the occasion, the Lt Governor observed that revolutionary changes are taking place in the agriculture and horticulture sectors in J&K.

He said that the promotion of local produce and taking it to the global market is one of the key focus areas of J&K Government and the Government is making continuous efforts to increase the resources and market linkages to further strengthen the horticulture sector.

While addressing the farmers, the Lt Governor said that the UT Government would continue striving hard to provide the best and advanced technologies to farmers. Welfare of the farmer community and increasing their income manifold is the priority of the Government, he added.

“I assure farmers that Mandis are very much here to stay. In fact, they are getting strengthened and modernized. People should not spread false information and mislead the farmers”, said the Lt Governor.

The Lt Governor said that the government is also setting up Farmers Producers Organizations in all the 20 districts of Jammu and Kashmir in the next three months to strengthen business activities related to agriculture and horticulture.

For the convenience of the farmers, free thresher is being provided in every panchayat of the UT. Road Tax on Tractors up to 3000 CC capacity has also been exempted and no tax will be paid on power tillers, he added.

Underscoring the interventions being made by the Government for progress and growth of agriculture and horticulture sectors, the Lt Governor observed that in the last few years, under the able guidance of the Prime Minister Narendra Modi, and because of the hard work of our farmers, agricultural scientists, and the policies adopted by the Horticulture Department, J&K is getting distinct recognition in the world scenario.

Central Government and UT Administration are constantly making efforts and taking decisions so that not only Farmers’ produce sees huge growth and gets three times the price, but can also receive greater handholding and end to end solutions, the Lt Governor observed.

For making J&K pioneer and self-reliant in food-safety, the Lt Governor asked the Agriculture Department to develop new state-of-the-art scientific research programs and take these programs from lab to farm under mission mode.

Reiterating Government’s commitment for exploring all the possibilities for giving a further push to the development of priority sectors like agriculture and horticulture, the Lt Governor recalled the recently held NITI Aayog meeting in which he had requested the Hon’ble Prime Minister to provide the facility of dry port and international flights to Jammu and Kashmir so that products, including those related to agriculture and horticulture could be exported directly.

The Lt Governor has also requested the NITI Aayog that instead of spreading the resources, the central government could consider specific product-based funding programs as our National Saffron Mission was successful because of its focus on one product.

He observed that experiments like Saffron Mission can also be used for other crops such as apples, walnuts, almonds, etc., which can cover the entire value chain of inputs, farms, processing, packing, and storage. This will also reduce dependence on rice and wheat and the funding coming from the government will go directly to value addition and processing units, he added.

The Lt Governor also recounted the innovative measures taken by the government to boost the horticulture produce in the UT.

He said that the Government of Jammu and Kashmir has signed an MoU with NAFED, through which high-density Apple, Walnut, Mango, Strawberry, and Litchi will be cultivated in 5500 hectares in the next five years. NAFED will also create three cold storage clusters in Kathua, North and South Kashmir with an amount of Rs 500 crores.

The Lt Governor also stressed on the need to pay more attention towards allied activities such as Beekeeping and Dairy development and assured government support for the development of these sectors.

Under “Mission for Integrated Development of Horticulture or MIDH” of the government, many instruments and facilities are being provided to the farmers. A lot of facilities are being made available by the government to facilitate farmers and ensuring good health of crops. Subsidized rates are being made available to the farmers on the material for the high-density plantation, due to which the production has also increased almost four times, he added.

The Lt Governor observed that the Ministry of Agriculture of the Central Government has signed MoU with more than 60 countries, which includes cooperation in research and development in agriculture, horticulture, and other allied sectors as well as providing a global market and full cooperation is also being provided by the government for all activities.

The Lt Governor made special mention of progressive farmers of the region.

I hope that more such events will be organized across J&K for promotion of the welfare of farmers, besides generating greater awareness about the huge potential of agriculture and horticulture sectors in the UT, concluded the Lt Governor.

Speaking on the occasion, Sh. Farooq Khan, Advisor to the Lieutenant Governor said that the Horti-Expo, which was inaugurated today by Lieutenant Governor, is an indication of how the department has worked during past several months while making the delivery system better.

He said that the administration is recognizing the efforts of the officers in the field and other people who are associated with the horticulture sector. He also suggested that the hand holding of NAFED should continue so that progressive farmers would reap maximum benefits and the set targets would be achieved in less time.

Sh. Navin Kumar Choudhary, Principal Secretary, Department of Agriculture Production & Farmers’ welfare and Horticulture, speaking on the occasion, highlighted the achievements of the department and allied sectors in the last one year.

While highlighting the role of National Agricultural Cooperative Marketing Federation of India Ltd (NAFED) in promoting Co-operative marketing of agricultural produce to benefit J&K farmers, Sh. SK Chadha, Managing Director NAFED, said that NAFED is lending a hand holding to progressive farmers with the latest technologies and farm mechanizations. He assured that awareness camps and farmer meets would be organized regularly across the UT.

Head of Departments; senior officers of concerned departments, scores of progressive farmers, prominent citizens, and other stakeholders were present on the occasion.

Artists from Cultural Unit Kashmir of DIPR enthrall audiences at…

Establishment of 400 Nagarvans in Country on anvil: Ashwini Kumar…