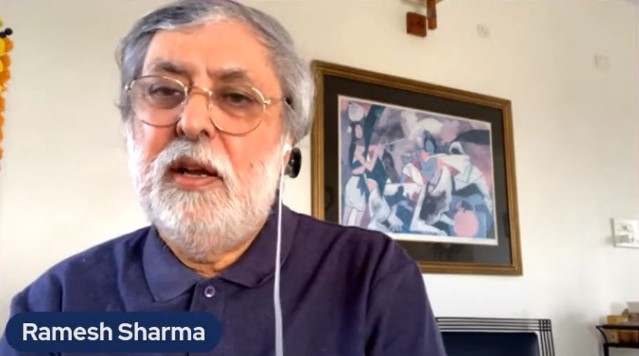 Ahimsa – Gandhi: The Power of the Powerless shows the global impact of Gandhian message of non-violence: Director Ramesh Sharma

Mumbai: The IFFI 51 Indian Panorama Non Feature film ‘Ahimsa – Gandhi: The Power of the Powerless’ decodes the power of non-violence and why it remains relevant to this day. It brings to the fore the global impact of the Gandhian message of non-violence: how it inspired several world leaders, the Civil Rights Movement in the United States; the Solidarity Movement in Poland as well as Nelson Mandela and the anti-apartheid struggle in South Africa. This was said by Ramesh Sharma, Director of the documentary film which pays homage to Mahatma Gandhi on the occasion of his 150th birthday and honours him as the leader of India’s non-violent independence movement. He was addressing a virtual press conference at the 51st edition of International Film Festival of India, in Goa today, January 21, 2021.

Ahimsa – Gandhi is not a film, but a passion, said the Director. “The film reminds us that we need to restore human rights and dignity on a universal level; it shows how Gandhiji’s message went beyond the shores of India, where he used non-violence as a powerful tool. Today, it still serves as an inspiration to societies fighting injustice.”

Sharma has given a call to youngsters to come forward and propagate the message of Gandhian non-violence, which he says is the need of the hour. Speaking about Gandhiji, he said: “Mahatma was an inclusive man. He believed that every religion and faith should have its own space. He feared that the fabric of inclusiveness is being broken these days. Gandhi never wanted the country to become a nation of one religion.”

Editor of the film Yamini Upadhye too addressed the press conference, joining from Goa. “Working for the film was an eye-opening experience; it was a masterclass to work with Director Ramesh.”

Speaking about the film’s message, she said that we have but two options – non-violence or non-existence. “The film decodes the power of non-violence and why it remains relevant to this day, as violence leads to violence and nothing else. There are only two options – either non-violence or non-existence. We learn little from our academics about Gandhiji. I got to know a lot more about Gandhiji, through the movie. We aspire to reach out to every single human being on the planet through our film.”

About ‘Ahimsa – Gandhi: The Power of the Powerless’

The film was produced to commemorate the 150th anniversary of the Father of the Nation Mahatma Gandhi. It also comes at a time when support for George Floyd, a black man who died last month at the hands of police in Minnesota, is morphing into a wider movement.

The film was directed and produced by Ramesh Sharma, who previously earned an Emmy nominee for “The Journalist and the Jihadi: The Murder of Daniel Pearl”. Production and rights sales are handled by South Africa-based ‘Distant Horizon’.

The film deals with oppression and the denial of basic freedoms to people by those who are in positions of power and who fiercely protect their positions by inflicting violence on innocent people. It speaks about the impact of Gandhi’s message of non-violence, and how it inspired several movements across the world.

iednewsdesk Jan 22, 2022
From December 1 to 2, the “BIG3 (Medicine and Medical Device) UNBOXING” event co-hosted by the SKKU Research…

University of Birmingham: €1.5M grant will enable research into why…