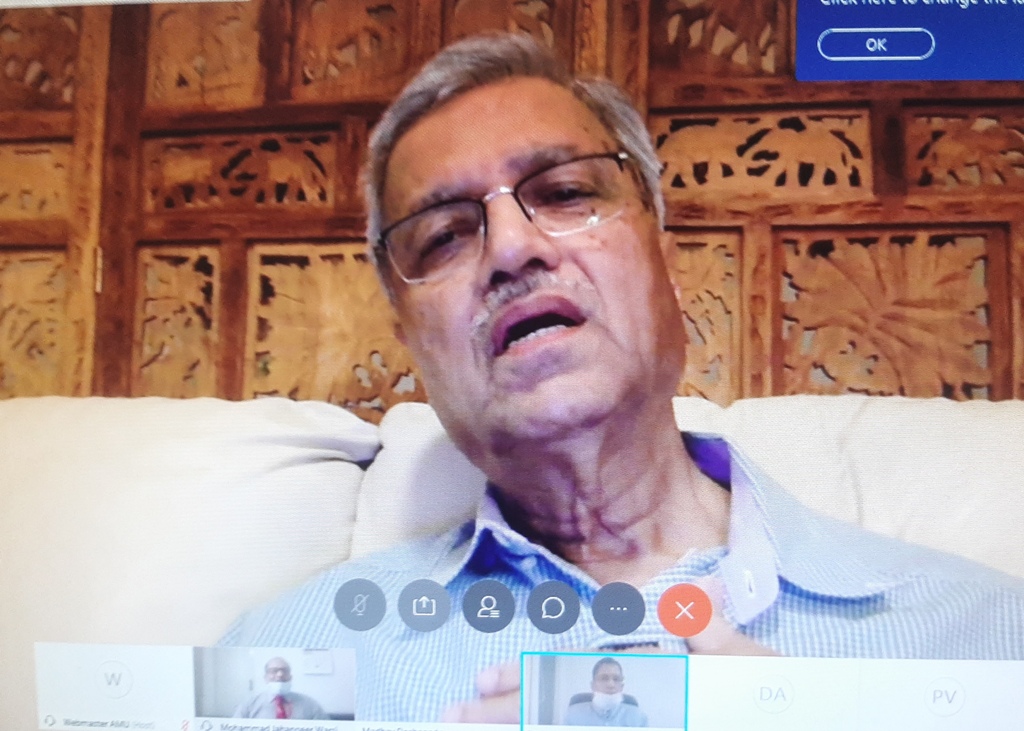 Aligarh: “Mahatma Gandhi’s principle of nonviolence or Ahimsa is integral to all religions and he used it as the most lethal weapon in Indian freedom struggle,” said Prof Madhav Deshpande (University of Michigan, AnnArbor, USA).

He was delivering the web talk on ‘Mahatma Gandhi, the Bhagwad Gita and his Perception of all Religions’, which was first in the series of lectures on ‘Thought and Philosophy of Mahatma Gandhi’ organised by the Aligarh Muslim University (AMU) to commemorate the 150th birth anniversary of Mahatma Gandhi.

In the keynote address, Prof Madhav Deshpande emphasised that scriptures of various religions such as Hinduism, Islam and Christianity among others shaped Gandhi’s character and transformed his life profoundly and permanently.

“Gandhi Ji’s reading of religious books started with Bhagavad Gita, which became an unfailing source of strength and solace for him and there is an interesting story related to how he was introduced to the book,” said Prof Deshpande.

He added that Gandhi’s theosophist friends?the two Olcott brothers?were studying the original Sanskrit text of the Gita alongside Edwin Arnold’s English translation when they invited to Gandhi to read the Sanskrit text of the book thinking that being a native of India, he would probably know Sanskrit better.

“They consulted Gandhi about the meaning of certain Sanskrit words, but he could not help. Gandhi confessed in his Autobiography that he felt ashamed, as he had read the divine poem neither in Sanskrit nor in Gujarati (1948, 90),” said Prof Deshpande.

He further pointed out that Gandhi Ji, however, was not someone to take his ignorance lightly, he determined to turn his ‘shame’ into a strong incentive to read and study not only the Gita in the original Sanskrit, but also other scriptures of the major world religions, such as the Christian Bible and the Islamic Quran.

Prof Deshpande elaborated that Gandhiji found the core of non-violence in Gita and other religious books and came to a conclusion that all religions lead to the straight path.

Even Gandhi Ji’s community prayers had recitation of the verses of religious books of various faiths, he said.

Gandhi Ji unflinchingly adhered to these philosophies and inspired generations across the world and his thoughts and ideas were not only central to the Indian freedom movement but became the bedrock of civil rights movements waged against oppressive regimes in various nations.

In the inaugural address, AMU Vice Chancellor, Prof Tariq Mansoor said that Gandhi Ji never wanted to become the head-of-the-state and as a devout Hindu, he wanted people of all religions to live in harmony and this makes him one of the greatest leaders to have ever lived.

“Gandhi Ji introduced religion in politics with good faith. He led the Khilafat Movement and always wanted to avoid the partition of the country on religious lines,” added the Vice Chancellor.

Introducing the speaker to the participants, Prof M J Warsi (Chairman, Department of Linguistics) spoke on the scholarship of Prof Deshpande.

He pointed out that Prof Deshpande’s research relates to the fields of the Sanskrit grammatical tradition, historical linguistics and sociolinguistics of Indo-Aryan languages, and the religious and philosophical traditions of India.

Prof M Abdus Salam delivered the welcome address and conducted the programme, while Prof M Rizwan Khan extended the vote of thanks.

The next lecture in the series will be held on August 6, in which Prof Faisal Devji (Oxford University, UK) will speak on ‘Gandhi’s Silence.’