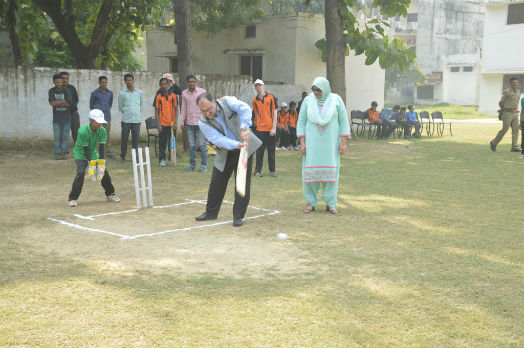 Aligarh: As part of the bicentenary birth anniversary of Sir Syed Ahmad Khan, the founder of the Aligarh Muslim University, the Ahmadi School for Visually Challenged organized a special programme featuring cultural events and felicitation ceremony.

Addressing on the occasion, chief guest, Justice Mr Ataur Rahman Masoodi said that he always wished to visit the University to refresh old memories. He said that India was privileged to have Sir Syed as one of its natives and without him we would not be able to avail the benefits of education. He pointed out that education knows no boundaries of religion, caste or financial standing. “The visually challenged children are special gift of God and are armed with immense pool of talent”, he added.

Prof Asfar Ali Khan said that Sir Syed Bicentenary celebrations are being organized by the University since last one year and will continue until next Sir Syed Day. He said that Sir Syed Ahmad Khan explored the areas which were not given importance during his time. Prof Khan underlined that Sir Syed’s philosophy was based on tolerance and respect for all religions, which inspired millions of people around the world.

Guest of honor, Mr Santosh Kumar Sharma, Commissioner, Municipal Corporation, Aligarh said that Sir Syed was a great philosopher and what he envisioned one hundred and fifty years ago, is still relevant in current scenario.

Dr Tazeen Beg, Assistant Professor, Clinical Anesthesiology and Division Chief, Anesthesia for Endoscopy at Stony Brook University Medical Center, New York said that AMU’s history reminds us of a trail of success stories which took shape in this University. “Sir Syed knew that the progress of any community was not possible without acquiring Western education”, said Dr Beg.

Special guest on the occasion Ms Geetanjali Sharma, Advocate and a senior Government Counsel said that Sahebzada Aftab Ahmad initiated a movement for empowering the visually challeneged children who were highly talented in the field of sports and music.

Earlier, Mrs Firdaus Rehman, Principal of the School welcomed the guests and presented a brief introduction of the chief guest. Informing that the school was established in 1927 by Sahabzada Aftab Ahmad Khan with a vision to providing education to visually challenged children, Mrs. Rahman said that Sir Syed’s mission cast a long lasting effect on people.

A cricket match was also held on this occasion with Justice Ataur Rahman Masoodi as chief guest. Prof Asfar Ali Khan, Prof Abid Ali, Prof Mohd Idrees, Mr M Shaheer Khan and Dr Shariq Aqeel, along with the teachers of Ahmadi School were present on the occasion. Mr MP Singh, a senior teacher of the school, performed as umpire while Mr Owais Hassan and Mr Moin Farooqui did the scoring.