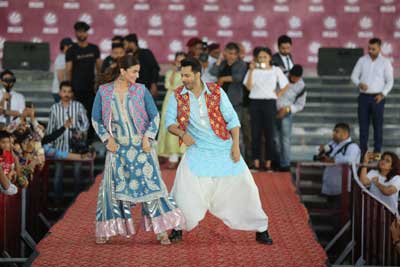 Jalandhar: Bollywood’s youth icon-stars Alia Bhatt and Varun Dhawan visited Lovely Professional University (LPU), today, where both of them performed energetically and excitedly on finding themselves amid a sea of students very eager to see them. Considered youth icon-bollywood stars countrywide, both of them admitted openly that they had an amazing experience at mammoth LPU stage. Feeling excited on being among the long rows of students in every direction of theirs, Alia and Varun performed on four full songs of their forthcoming periodic film ‘Kalank’. Both of them shared: “Coming to LPU seems to us as appearing for Final Examination after full preparation. Considering the eve of the Punjab’s great festival “Baisakhi”, both of them danced on the “thaps of dhol” as true and to the core Punjabi. Heart throbs of the millions of cine-goers across the country; the star-actors performed for all at LPU and interacted specifically with LPU students of Journalism and Film Production department.

Answering to the LPU journalism students, Varun Dhawan told them about his daily hectic routine; management of time, gym exercises; fixed diet; Punjabiyat; chemistry with Alia Bhatt, in particular, while playing characters; the direction tips where a director is all in all for a film and takes characters as tools for true depiction of the motive chosen; bio-pic films; and more. He also shared: “LPU has such a lovely environ at the campus that we, Alia & I, both want to get enrolled here for further studies to have amazing experience”. After his last performance, he proved his Punjabi stance once again and bid all a Punjabi adieu with “Bole so Nihal, Sat Sri Akal”.

Putting her very first step on the wide ramp and seeing sea of students before her, Alia Bhatt found it as the most joyous moment of her life and admitted loudly: “I had never seen such a big, amazing and disciplined crowd of students before in my life”. She shared with students her experience of working in a multi-starrer movie with senior actors. She told them that seniors always prove supportive to doings of their juniors. Moreover, each character has its own story which is ultimately intertwined with other characters. She also performed on a classical number “Ghar More Pardeshiya” along with classical-dancing students at LPU. Prior to this Varun and Alia had presented a scintillating performance on new song “Kalank Nahin, Ishq hae kajal Piya”.

Prior to this, on their reaching at the campus Lovely Group Chairman Mr Ramesh Mittal, Vice Chairman Mr Naresh Mittal, LPU Chancellor Mr Ashok Mittal, Pro Chancellor Mrs Rashmi Mittal, Director Mr Aman Mittal welcomed the elite stars at the campus. On this occasion, special arrangements were also chalked out so that thousands of LPU students could have a very close-look of their ideal & adoring stars.