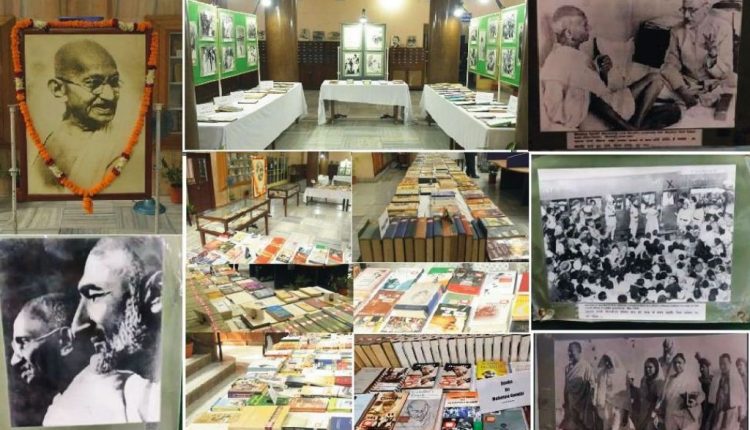 Aligarh : No other apostle of peace has created as great an impact on the world as the missionary of non-violence, Mahatma Gandhi and to pay homage to the father of the Nation, Aligarh Muslim University (AMU) today celebrated the Gandhi Jayanti, the 152nd birth anniversary of the Mahatma with an online celebration of the Maulana Azad (MA) Library.

Addressing AMU teachers, students and other staff; the Vice Chancellor said that Mahatma Gandhi was one of the greatest world leaders and his ideas and views were able to withstand the test of time.

“There is a long, diverse and awe-inspiring list of great leaders and thinkers who were inspired by Mahatma Gandhi. One of them was Martin Luther King Jr, who used the Gandhian principle of Satyagraha to advance the cause of equality and social justice, and acquire equal citizenship rights for African Americans”, said Prof Mansoor.

“Mahatma Gandhi’s empathy for the poor, oppressed, and lower caste people is absolutely unparalleled. This great man continues to command respect not only in India but all over the world. He was famously quoted saying ‘my life is my message’—and it is amazing to see how simple he lived. Gandhi Ji’s life was a perfect reflection of his thoughts and action”, said Prof Mansoor.

He added: “As a devout Hindu, Gandhi Ji believed that a respectful study of another’s religion was a sacred duty and it did not reduce reverence for one’s own. He believed all great religions were fundamentally equal and that there should be innate respect for them, not just mutual tolerance. Gandhi’s ideas on religion and attitude toward other religions serve as a secular blueprint to ponder over and implement all over the world”.

Prof Mansoor later administered an online pledge to work with dedication for preserving and strengthening the freedom and integrity of the Nation. He also led AMU teachers, students and non-teaching staff in a ‘Swachchta Shapath’ (Cleanliness Pledge) by saying that Mahatma Gandhi had dreamt of a developed and clean country.

Earlier in the day, the Vice Chancellor inaugurated the virtual exhibition of rare books, documents, journals, and finely-curated photographs depicting all the significant events from Mahatma Gandhi’s life.

Speaking on the greatness of Mahatma Gandhi, Prof A R Kidwai (Director, UGC HRD Centre) said that Gandhi Ji’s teachings promote avoidance of violence and finding peaceful solutions to conflicts. People across the world have learnt to be patient, kind and honest from Gandhiji’s teachings.

“Wardha Scheme of Basic Education (1937) which is also known as Nai Talim / Buniyadi Talim was the outcome of the thinking of Mahatma Gandhi. He considered education as an effective instrument of national reconstruction and appointed a committee under the chairmanship of Dr Zakir Hussain to formulate the scheme of basic education in India”, he added.

Prof Kidwai elaborated that Mahatma Gandhi in one of the editions of Young India wrote that the AMU students can give lead to the National Movement and congratulated their parents for choosing AMU for their advance education.

Prof Ramesh Chand (Chairman, Department of Hindi) pointed out that Gandhianism starts with the basic belief of ‘Simple living and high thinking’ and its objective is to transform the individual and society.

“Therefore, in the turbulent times where the world is grappling, it is imperative to strive to inculcate Gandhian philosophy in various facets of life. Gandhiji’s political contributions offered us Independence and his ideologies enlightened the world. Every individual, thus, should follow the key Gandhian teachings in their day to day life for a happy, prosperous, healthy, harmonious and sustainable future”, he asserted.

Prof Chand emphasised that Gandhi Ji’s teachings not only led to the freedom from British rule, but also brought dignity to all sections of society and an end to exploitation across the world.

AMU students, Yasir Ali Khan (PhD) and Sharmien (BA Hons) delivered speeches on how Mahatma Gandhi worked for solutions to all problems through the means of non-violence and how his ideas based on non-violence are entirely important in the new world.

iednewsdesk Oct 28, 2021
Complicated contracts, confusing state laws and cut-price conveyancing is creating a legal minefield for off the…