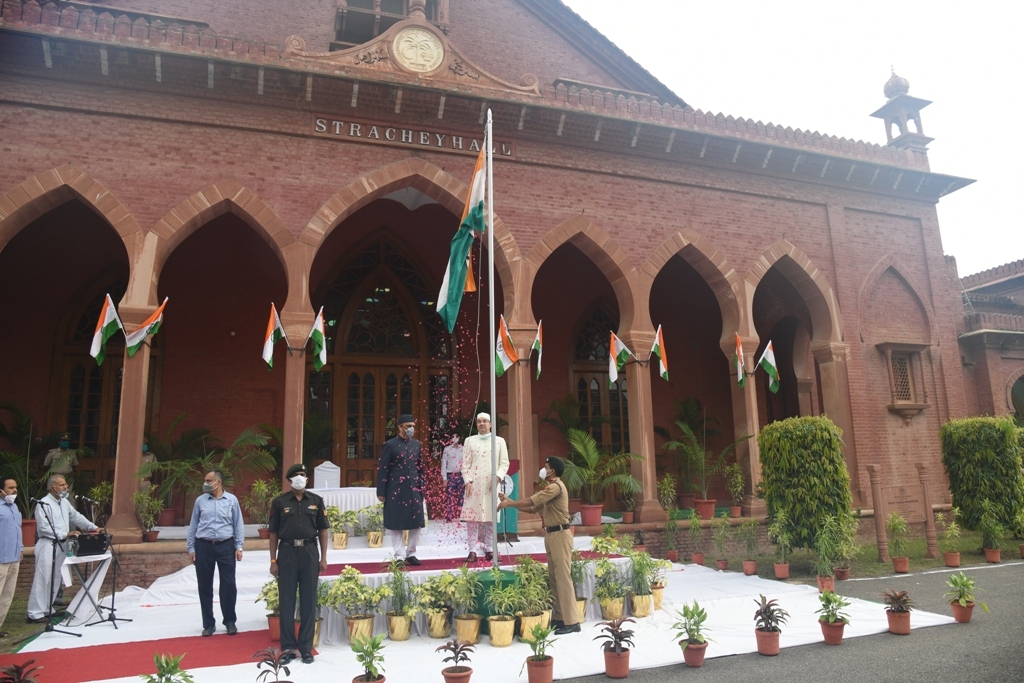 Aligarh August 15: “India symbolizes the unity in diversity and tolerance and despite having religious and cultural diversity; our nation remains the largest one to have people living peacefully with each other. The idea of India envisaged by the father of the nation, Mahatma Gandhi, for creating an inclusive multi-religious, multi-cultural, multi-linguistic, multi-ethnic society showing unity in diversity and reflecting the will and aspirations of different sections of society was enshrined in the Indian Constitution making India a secular and democratic state”, said Professor Tariq Mansoor, Vice-Chancellor, Aligarh Muslim University while addressing on the occasion of 74th Independence Day of India.

Professor Mansoor, after hoisting the national flag at the historic Strachey Hall of the university, paid rich tributes to the indomitable heroes of the freedom movement, including Pandit Jawaharlal Nehru, Sardar Patel, Maulana Azad, Subhash Chandra Bose, saying the day provides us an opportunity to remember and applaud their services.

He said, “It was only because of their hard struggle and sustained efforts that we stand today and breathe in an independent India. Our nation can never forget the ultimate sacrifices of freedom fighters such as Shaheed Bhagat Singh, Ashfaquallah Khan, Khudi Ram Bose, Chandra Shekhar Azad and many others”.

Addressing a scantly-arranged gathering of faculty members and students in view of the COVID-19 Pandemic, the Vice-Chancellor expressed pride in the achievements the country has made in the field of education, infrastructure, technology, economic development, space exploration, poverty alleviation, food security and stabilizing democratic institutions.

University of Reading: SPACE HURRICANE OBSERVED FOR THE…

Referring to the contributions of the founder of the university, Sir Syed Ahmad Khan, Professor Mansoor pointed out, “Sir Syed’s vision was couched in the idea of secularism and communal harmony and faithfully represented the composite culture of India. He was a nationalist and secularist to the core and with his far-sighted vision, realized very early that India’s future is in the coexistence between different religions. He also foresaw that coexistence and progress in such a society will depend on even-handed justice to all sections”.

He urged the faculty members, students, alumni and support staff to make dedicated and sincere efforts for the progress and development of the country and the institution.

Later, the Vice-Chancellor planted saplings in the premises of Sir Syed Hall to mark the occasion.

Meanwhile, the flag-hoisting ceremonies were organized with gaiety and enthusiasm at all colleges and schools of the university. The Provosts of all residential halls also hoisted flags at the provost offices.