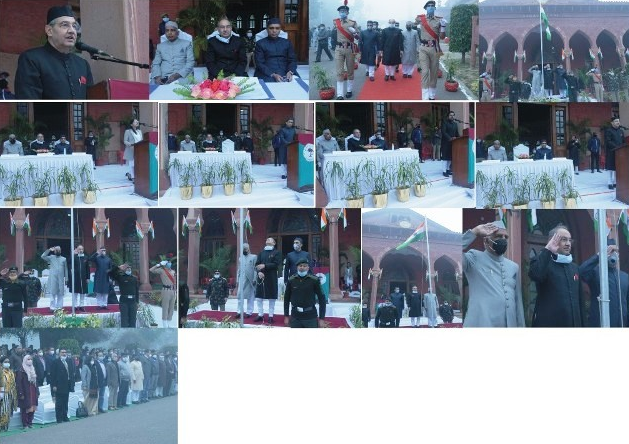 Aligarh: “Our Constitution is not just a mere set of fundamental laws that form the basis of governance, but it embodies certain basic values, philosophies, and objectives. These values find expression in various articles and provisions of our Constitution, as envisaged in the preamble-pertaining to sovereignty, socialism, secularism, democracy, republican character, justice, liberty, equality, fraternity, human dignity, and the unity and integrity of the Nation,” said Aligarh Muslim University (AMU) Vice Chancellor, Professor Tariq Mansoor.

He was delivering the Republic Day speech at the Strechy Hall. AMU today celebrated the 72nd Republic Day amid social distancing measures with enthusiasm and gaiety to commemorate the date on which the Constitution of India came into effect, in the year 1950, and the country became a republic.

Prof Mansoor added: “The founding fathers of our Nation had visualised a future with mutual coexistence of various religions, cultures, ethnicities and languages. The vision of AMU founder, Sir Syed Ahmad Khan also encompassed the idea of unity in diversity. Hence, the portals of this university have always remained open to all, without any discrimination on the basis of caste, creed, region and religion.”

“With the untiring efforts from all quarters, we have been successful in making AMU, a leading educational institution, recognised for high quality education, nationally and internationally,” said the Vice Chancellor adding that in the course of 100 years, AMU has carved a niche for itself in scholarship and research.

He pointed out that AMU was privileged to have Honourable Prime Minister, Shri Narendra Modi to address the university fraternity in the centenary celebrations.

“The Prime Minister’s encouraging words instilled a firm resolve to carry forward the task of Nation building with a new vigour and to the best of our ability. His reference to AMU as ‘Mini India’ has reaffirmed AMU’s true cosmopolitan and secular credentials,” further said Prof Mansoor.

He emphasised that AMU rolls students from 29 Indian states and union territories and 20 different countries.

Vice Chancellor stressed: “Early in January 2020, we sat ourselves on a task to build a landmark gateway, the Centenary Gate-a fitting tribute to mark the 100 glorious years of the establishment of our university. This herculean task was completed in a record time, despite the Covid pandemic.”

The Centenary Gate will shine on the unique AMU cultural heritage and will stand tall as a testimony to inspire our posterity in the spirit of Sir Syed.

He pointed out that the Time Capsule, a highlight of the Republic Day celebrations, will be buried today to preserve AMU’s magnificent history.

“AMU played a vital role in testing and treatment of Covid patients and conducting the vaccine trial. I credit this effort to the entire AMU fraternity particularly of doctors, nurses and paramedical staff,” said Prof Mansoor.

He urged people to not believe in rumours and cooperate in the mass vaccination program.

“The World’s largest vaccine program is underway in our Country, which has been at the forefront of the vaccine development production,” specified the Vice Chancellor.

He indicated that all efforts are being made to start new courses in the centenary year with the aim of opening job opportunities. These courses include DM (Cardiology); P G Diploma in Pain Management, Intensive Care and Neuro-Anaesthesia; B Tech in Food Technology; M Tech in Solar Energy, Bio-Medical Engineering, Artificial Intelligence, Disaster Management, Earthquake Engineering and Robotic Engineering; MSc in Data Sciences, Forensic and Digital Sciences and Agricultural Sciences; MD in several subjects of Unani Medicine; BSc Nursing and Paramedical courses.

Prof Mansoor asserted that the teamwork, consultation, coordination and planning have been the hallmark in the successful completion of the university projects.

“In the smooth functioning of the university, I am greatly indebted to the support from teachers, supporting staff, students, alumni and well-wishers,” said the Vice Chancellor.

He also congratulated STS School student, M Shadab for winning the ‘PM Youth Award’ and for interacting with the Honourable Prime Minister.

The Vice Chancellor exhorted everyone to strengthen Indian democracy by being united, fearless and positive. He also reminded everyone about the struggles of the founding fathers of India in achieving ‘Purna Swaraj’and paid homage to Mahatma Gandhi, Dr B R Ambedkar, Jawaharlal Nehru, Sardar Patel, Bhagat Singh, Subhash Chandra Bose, Khan Abdul Ghaffar Khan and Maulana Azad among other leaders.

The university witnessed celebrations in all offices, faculties, colleges, departments and schools. The National Flag was also unfurled at the Administrative Block Building, Vice Chancellor’s Lodge, Maualana Azad (MA) Library, Faculty of Arts, all schools and colleges of the University, all offices of the Deans and DSW, all Provost Offices and the Proctor’s Office.