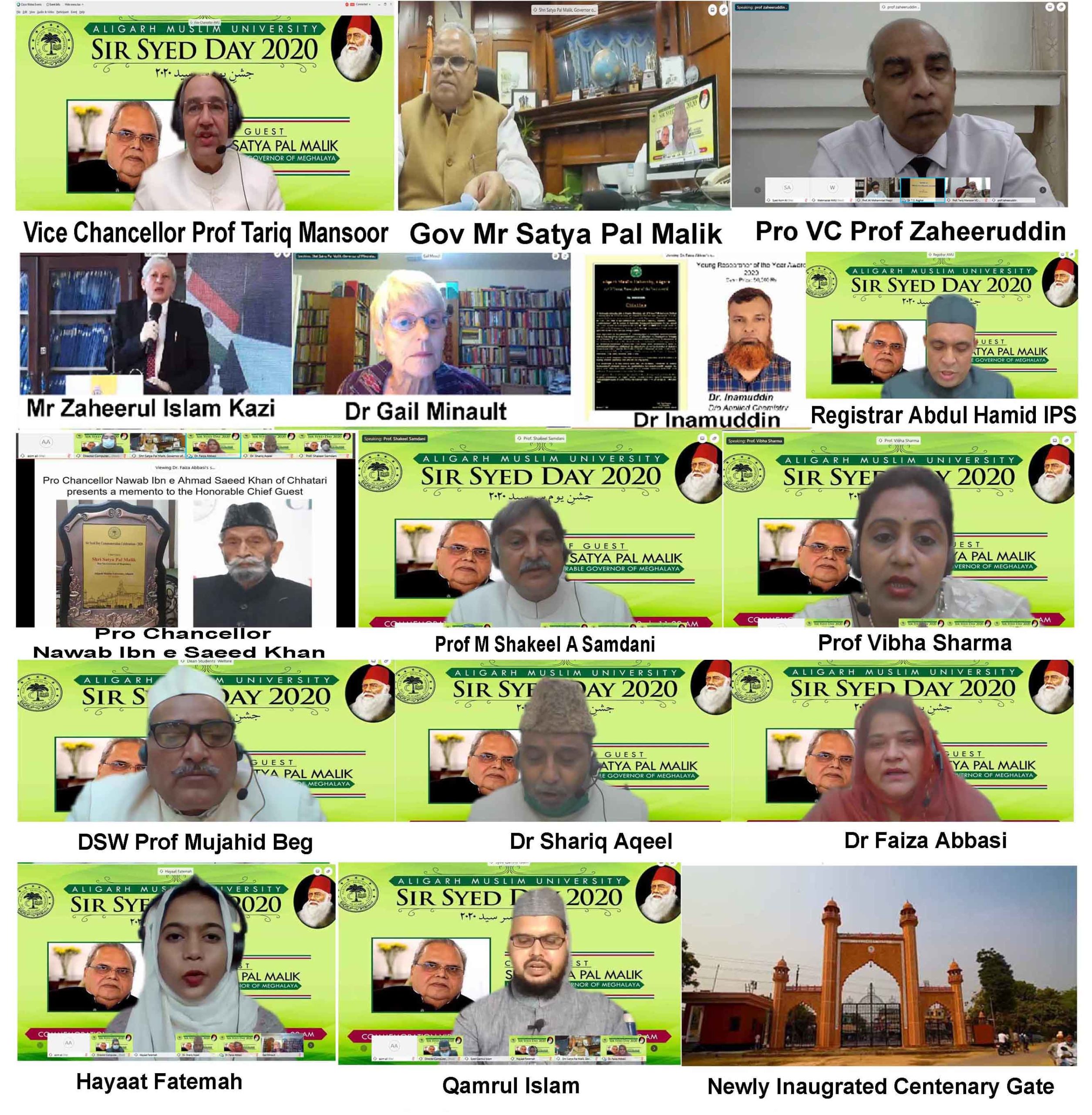 Aligarh: “Sir Syed’s vision of a nation, one of the earliest expressions of an idea of India includes all its inhabitants without distinctions on the basis of religion, caste or race. He promoted religious affinity, tolerance and mutual understanding among the people of India,” said Governor of Meghalaya and former Union Minister, Mr Satya Pal Malik who also served as the Governor of Jammu and Kashmir, Bihar and Goa.

He was delivering the Sir Syed Day commemoration address as the Chief Guest of the Sir Syed Day in the Aligarh Muslim University (AMU). The function was held online to conform to Government of India Guidelines on social distancing.

Governor Malik emphasised that Sir Syed is truly placed among the architects of modern India by the intellectuals and scholars alike for promoting modern and scientific education in the 19th century India.

Addressing AMU students, he stressed: “You are the true realisation of Sir Syed’s dream as you are serving the nation with the true spirit of the ideals of Sir Syed.”

Speaking on AMU’s centenary year, the Chief Guest said: “The centenary year of this historic university could have been full of festivities throughout the year and the world of education would have witnessed a grand celebration, had our world not been in the grip of the Covid 19 pandemic.”

“AMU has still managed the celebrations through academic discourse with safer means and precautions to prevent the virus spread. The eventful centenary year has come up with AMU being listed in the best Indian universities in various rankings,” said Governor Malik.

He stressed: “We are living in a challenging time due to the pandemic, but it is heartening to see the that AMU rose to the occasion with full potential for serving humanity as its Jawaharlal Nehru Medical College (JNMC) has set an example for the nation by leaving no stone unturned in the health care of the infected patients,” said Governor Malik.

Applauding the efforts of the JNMC corona warriors, Mr Malik said that the doctors in the Medical College of this university have been working tirelessly for providing health care to patients from the lower economic strata.

“It is a common desire of the nation that a historical and heritage institution like AMU catering to the greater need of our country, should continue to lead the country in providing quality education in the fields of science and technology, social sciences and humanities and all other significant branches of knowledge in leaps and bound, ” he said adding that it is our collective responsibility to provide full support for the welfare of this institution of prominence.

Reminiscing the days, when he represented Aligarh constituency as a Member of Parliament (1989 to 1991) and AMU Court simultaneously, he said that AMU became very dear to him.

“My admiration for AMU grew with time and since then I have been trying to contribute in whatever ways for the welfare of this great seat of learning,” he said recalling that during those days, he always felt that AMU was the biggest pride of the Aligarh constituency and he continues to be proud of his association with this institution, its achievements and successes,” said Mr Malik.

He recalled that AMU faculty members including the late eminent poet and lyricist, late Prof Shahriyar and students had campaigned for him when he contested election from the Aligarh constituency.

Governor Malik also spoke about the cooperation and immense help he received from AMU AMU Vice Chancellor, Professor Tariq Mansoor in convincing the Kashmiri students to stay at AMU and not to return home during the 2019 disturbance in the Kashmir valley and also praised his efforts for the progress and development of the university.

In the welcome address, AMU Vice Chancellor, Professor Tariq Mansoor said that Sir Syed brought about the great revolution that transformed the Indian society in all walks of life. He was a dynamic and mutli-faceted person, and a prolific versatile writer who wrote a very large number of books on as diverse subjects as education, religion, culture, journalism, literature, social reforms, economics and politics.

“Sir Syed founded the Scientific Society in 1864, for publishing the Urdu translations of books on science and other subjects. He brought out the Aligarh Institute Gazette in 1866, an organ of the Scientific Society for motivating people towards his educational and reformative movement,” added the Vice Chancellor.

Speaking on the centenary year of the university, the Vice Chancellor further said: “It is a matter of great pride, happiness and satisfaction that we are celebrating 100 years of AMU’s establishment as a university.”

He added that with the realisation of Sir Syed’s dream, AMU is making steady progress in all branches of knowledge, hundred years after its establishment by scaling new heights of academic excellence due to its high standard teaching, relevant and focused research of quality, and diversity parameters.

AMU has been continuously rated amongst the top most Indian Universities by all the prestigious national and international ranking agencies, said Prof Mansoor.

He categorically stated that AMU is second to none in its duty towards the nation and has always risen to the occasion at the time of natural catastrophes and other crises.

“In this challenging period of Covid-19 pandemic, the Jawaharlal Nehru Medical College of Aligarh Muslim University has been playing a pivotal role in providing affordable/free medical facilities to the infected patients of particularly the Western Uttar Pradesh. The microbiology lab of the medical college has performed more than one lac twenty thousand RT-PCR tests and created a separate isolation ward for the covid-19 patients, equipped with the special facilities of the dedicated operation theatre, labour room and renal dialysis. Plasma therapy is also being done in the hospital,” he pointed out.

The Vice Chancellor emphasised: “We at AMU, are following footsteps of Sir Syed and thus AMU is a model institution for communal harmony and mutual co-existence. The doors of the institution are always open to all, without any discrimination on the basis of religion, caste or creed.”

He further added that Sir Syed was an ardent proponent of Hindu-Muslim unity and India of his dream was inclusive where there was unity in diversity, and where there was no discrimination on the basis of religion, race, caste, or colour. Sir Syed stood for tolerance, broad-mindedness and catholicity of views.

Concluding the speech, the Vice Chancellor spoke about how Sir Syed’s teachings are as relevant today as they were in his life time.

Governor Malik and Professor Mansoor honoured eminent historian and reputed author, Dr Gail Minault and Anjuman-I-Islam, a Mumbai based educational conglomerate with the Sir Syed Excellence Awards in the international and the national categories respectively. Dr Gail Minault received a citation and a cash prize of Rs two lakhs, while Anjuman-I-Islam was given a cash prize of Rs one lakh with the citation.

Receiving the Sir Syed Excellence Award in the international category, Dr Gail Minault (Professor Emerita, Department of History, The University of Texas at Austin, USA) said that she is humbled for the chance of being a part of the celebrations-even if only virtually.

She discussed her research on the Khilafat Movement and how important it was for her to find out what the Ali Brothers, and Abdul Bari Firangi Mahali, and Maulana Azad were writing, thinking, and saying.

Dr Minault further spoke about the help she received in her research from the families and descendants of the founders of schools, and the editors and publishers of those journals, most especially the family of Shaikh Abdullah of Aligarh, founder of Aligarh Girls’ School, which later became Aligarh Women’s College.

She made a special mention of Mumtaz Jahan Haidar, who was for many years the Principal of the Women’s College, her sisters and other family members.

Receiving the award on the behalf of Anjuman-I-Islam, its President, Mr Zaheerul Islam Kazi said that Anjuman-I-Islam was founded in the year 1874, by a group of visionaries led by Justice Badruddin Tyabji and has since founded 100 Institutions from pre-primary schools to graduate and postgraduate level.

He added that the Anjuman-I-Islam follows the teachings of Sir Syed in providing he marginalised sections with the quality education.

Dr Inamuddin, Assistant Professor, Department of Applied Chemistry, Aligarh Muslim University (AMU) was conferred with the ‘AMU Young Researcher of the Year Award’ in the Sciences, Life Sciences, Engineering, Medicine and Unani Medicine category. He received the award with a cash prize of Rs 50, 000.

Mushtaq ul Haq Ahmad Sikander, a student of the Institute of Advanced Studies in Education, Srinagar won the first prize of the All India Essay Writing Competition organised by the University to mark the birth anniversary of its founder, Sir Syed Ahmad Khan.

The proceedings of the day began with a Quran Khwani (Quranic Recitation) after the Fajr prayer at the University Mosque. The Vice Chancellor, Prof Mansoor with faculty members and officers of the University paid floral tribute at the Mazaar (grave) of Sir Syed following the traditional ritual of ‘Chadar Poshi’.

The Vice Chancellor also inaugurated the online ‘Exhibition of Books and Photographs’ pertaining to Sir Syed Ahmad Khan at the Sir Syed House. The exhibition was jointly organised by Maulana Azad Library and Sir Syed Academy.

Later in the day, AMU Chancellor, Syedna Mufaddal Saifuddin inaugurated the Centenary Gate at the northern side of the AMU campus in virtual mode. The Vice Chancellor, Professor Mansoor on behalf of the Executive Council has named it as ‘Centenary Gate’ and the name in Urdu has been inscribed on it.

The Vice Chancellor took the initiative to build the grand gate to mark the centenary of the establishment of the AMU in 1920.

Making AI more ‘explainable’ in health-care settings may lead to more mistakes: U of T researcher