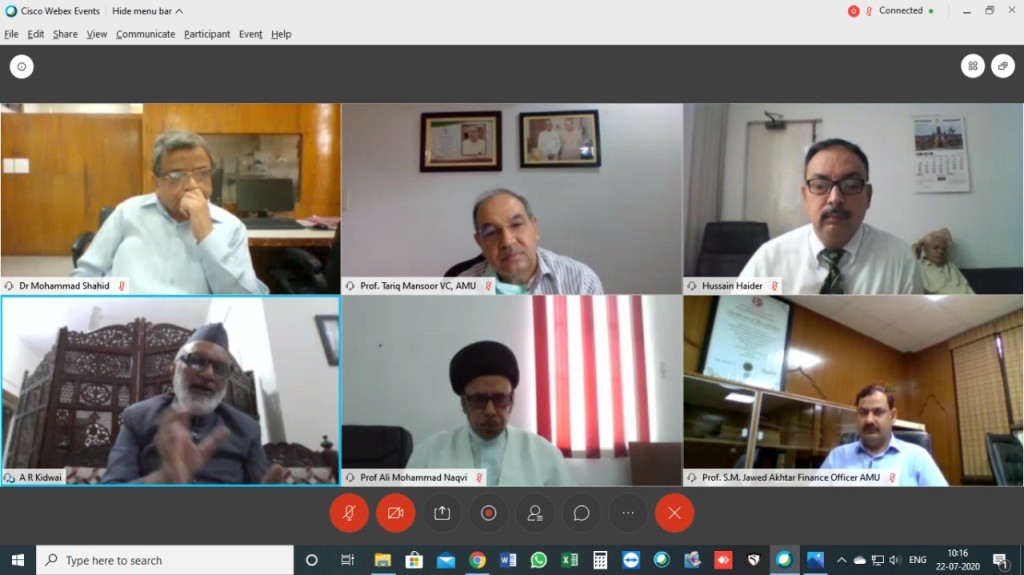 Aligarh: Aligarh Muslim University (AMU) Vice Chancellor, Professor Tariq Mansoor today released two books on Sir Syed Ahmad Khan by Prof Christian W. Troll and a vintage calendar complied by Dr Sir Ziauddin Ahmad as a part of the ongoing centenary celebrations of the University. The function organised by the Sir Syed Academy was held through a video conferencing platform in line with Government of India guidelines of social distancing.

Releasing ‘The Gospel According to Sayyid Ahmad Khan (1817-1898)’ which offers an annotated translation of ‘Tabyin Al-Kalam’, ‘Sayyid Ahmad Khan: A Reinterpretation of Muslim Theology’ and a 1911-1912 calender of Mohammadan Anglo-Oriental College; the Vice Chancellor said that the books by Prof Troll shed important light on the spiritual and intellectual journey of Sir Syed.

He added that Dr Sir Ziauddin Ahmad was a dynamic vice chancellor, whose vision led to the establishment of the Jawaharlal Nehru Medical College (JNMC) in the university.

In the presidential remarks, Prof Mansoor said that AMU supports all projects that publish documentary editions of historical records as they make important primary source materials from all periods more accessible and understandable.

“Due grants have been provided to the Sir Syed Academy for digitisation of all important records,” added the Vice Chancellor.

He further said that despite the Coronavirus pandemic, AMU is determined to go ahead with all plans and projects for the centenary year celebrations.

Prof Abdur Raheem Kidwai, Director, Human Resource Development Centre emphasised that ‘Tabyin Al-Kalam’ is the first commentary of the Bible written by a Muslim and its title is a remarkable reflection of interfaith dialogue.

He added that ‘Tabyin Al-Kalam’ illustrates scholarship of Sir Syed Ahmad Khan on religions, respect for different religions and his own belief religious belief, which he never compromised.

Shedding light on ‘A Reinterpretation of Muslim Theology’, Dr Rahat Abrar, Director, Urdu Academy elaborated that it is a significant book on Sir Syed’s religious thoughts in which Prof Troll has duly bridged the gap between east and west.

“A Reinterpretation of Muslim Theology by Prof Troll was converted into a book from a Phd thesis he submitted at the University of London in 1978,” said Dr Abrar adding that the book is one of the three best researched books on Sir Syed’s thoughts, the other two highly cited books are ‘The reform and Religious Ideas of Sir Syed (1949)’ by Dr JMS Baljon and ‘Religious thought of Sir Syed’ by Dr Bashir Ahmad Dar.

Speaking on the 1911-1912 calendar, Dr Mohammad Shahid (Deputy Director, Sir Syed Academy) said that the calendar compiled by Dr Sir Ziauddin Ahmad provides details on fund raising campaign for the establishment of AMU and the list of MAO College Trustees, Members of Board of Management, Staff Members of the College and School and names of graduates. He also extended the vote of thanks.

India-US partnership can play an important role in helping the world bounce back faster after the pandemic: PM Narendra Modi