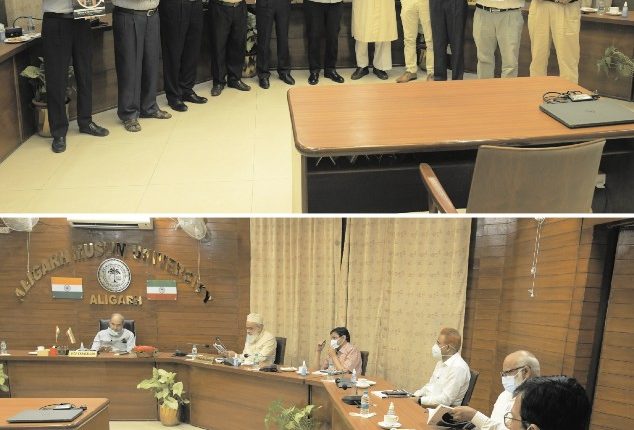 Aligarh : Over the past hundred years, the Faculty of Science, Aligarh Muslim University (AMU) has prepared thousands of scientists, professionals, and science and mathematics academicians for the benefit of society; It is what that the Faculty is justifiably proud of and for remembering success—a volume on ‘100 years of the Faculty Science’ was today released by the Vice Chancellor, Prof Tariq Mansoor in the Selection Committee room of the Administrative Block.

“The Faculty of Science in its 100 years has imparted education rooted in inspiration, ethics, and intellectual inquisitiveness. Today the Faculty presents numerous scientific achievements of international significance. The students have been provided with a slew of opportunities and in the current evaluation of the scientific performance of institutions, our Faculty of Science is among the top in the Country”, said Prof Mansoor.

Prof Qazi Mazhar Ali (Dean, Faculty of Science) said, “AMU founder, Sir Syed Ahmad Khan was a man of varying specializations and his interest in science can be traced back to the establishment of ‘Scientific Society’ in 1864”.

He added that AMU is a 100-years-old and Departments such as Physics, Mathematics and Chemistry are running from the time of Mohammadan Anglo Oriental College (MAO).

Prof Mohammad Sajjad Athar (Joint Editor of the Volume and Professor of Physics) pointed out that the Department of Physics, which runs under the Faculty of Science has a long tradition of direct or indirect academic links with Nobel Laureates such as Sir J J Thomson (1910) and Albert Einstein (1921) to Takaaki Kajita (2015).

He pointed out that it is a rare privilege for an educational institution to have centenary celebrations as these occasions recount the significant accomplishments, in order to inspire the coming generations and provide assessments to attempt achieving newer heights.

The chairmen of various departments of studies under the Faculty of Science such as Physics, Mathematics, Chemistry, Geography, Geology, Computer Science and Interdisciplinary Department of Remote Sensing and GIS Applications attended the ceremony.