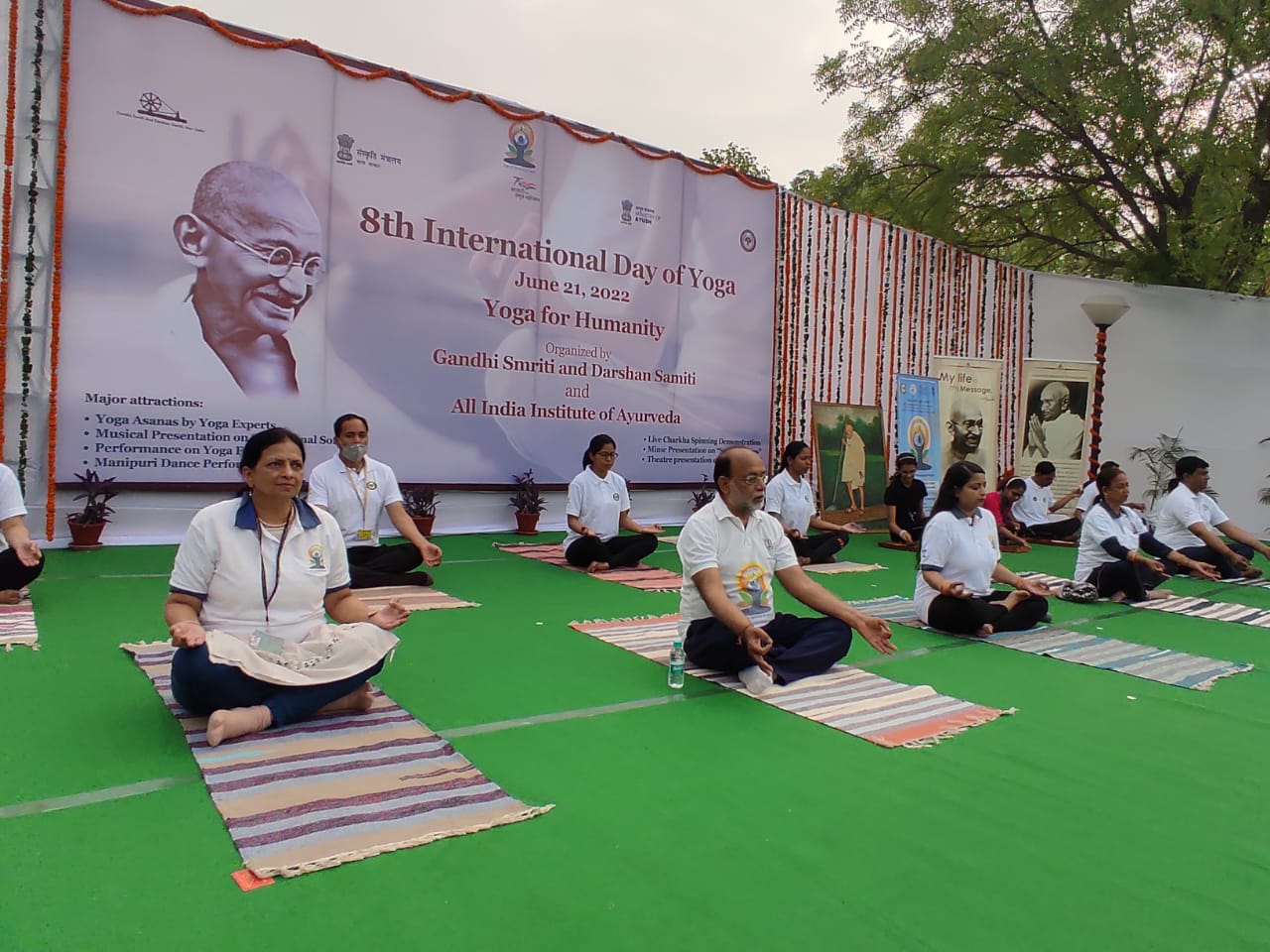 New Delhi : On the occasion of International Day of Yoga, All India Institute of Ayurveda (AIIA), an autonomous body under the Ministry of Ayush, Government of India, in collaboration with Gandhi Smriti and Darshan Samiti (GSDS), held a grand programme in New Delhi to demonstrate a common yoga protocol.

The location chosen for the Yoga demonstration was Gandhi Darshan, Rajghat, with a view to celebrate the occasion reminiscing and reliving the memories of the father of the nation, Mahatma Gandhi. Shri Vijay Goel, former Union Minister and Vice Chairman, GSDS, graced the event as the chief guest, and Smt. Jai Devi Kaushal, MLA, Bhartiya Janta Party, Uttar Pradesh was the Guest of Honour.

The programme began early in the morning with a prayer, followed by a welcome address by Shri Sushil Kumar Tripathi, Director, GSDS. Shri Vijay Goel and Dr. Tanuja Manoj Nesari, Director at AIIA, along with other dignitaries, also addressed the audience.

Besides the Common Yoga Protocol, a Yoga Fusion was demonstrated by a team from AIIA, besides a cultural programme from GSDS, which included mime, music, theatre, and dance. The event ended with a Vote of Thanks by the dignitaries and a visit To Gandhi Darshan Museum.

On the occasion, Dr. Tanuja Manoj Nesari, Director at All India Institute of Ayurveda, said, “Yoga is an Indian cultural heritage that we now proudly share with the whole world. Today, it is connecting us all and I believe this year’s theme ‘Yoga for Humanity’ is in sync with this thought. Yoga is not only an exercise but a way of life that encompasses all aspects of our mental and physical well-being. This year, the occasion is even more special as we are also celebrating ‘Azadi ka Amrit Mahotsav’. We strongly believe in the power of Yoga and through this event we not only want to demonstrate this but also want to highlight how deep-rooted it is in our culture. I want to congratulate and thank everyone for their active participation.”

Over the past one month, AIIA has been running the campaign #YogaSeAyu for 8th International Day of Yoga. The integrated campaign was in sync with the MoA’s ‘Yoga Utsav’ and promoted the concept of combining Yoga and Ayurveda to achieve holistic healing.