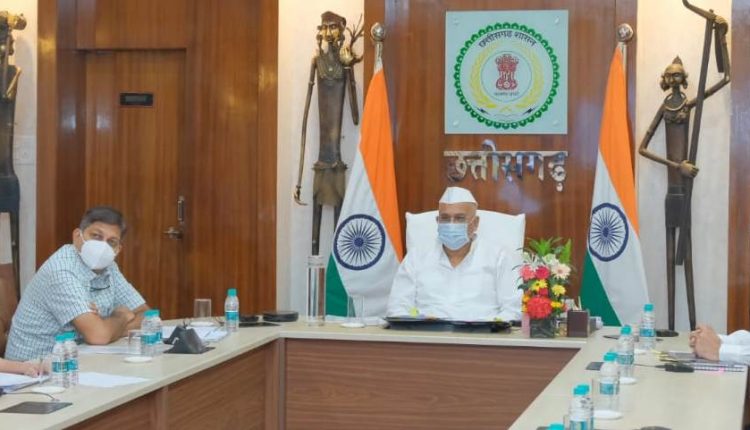 All possible measures being taken to stop the pace of corona infection: Chhattisgarh CM Bhupesh Baghel

Raipur: Governor Ms. Anusuiya Uike said that political party workers have an important role in spreading public awareness to prevent corona infection. He urged the heads of political parties to make people aware of measures to prevent the disease from village to village through their cadres. The Governor was addressing an all-party virtual meeting held today to discuss prevention of spread of corona infection in the state. Chief Minister Bhupesh Baghel and representatives of other political parties were also present in the meeting.

The Governor said that to prevent the spread of corona infection in the state, people from the border Maharashtra state need to be investigated. She said that arrangements should be made for this at the state border and quarantine centers should be set up. She called for the need to make people aware of the proper use of remdesivir injection. Governor said that it is very difficult for the state government alone to deal with the corona pandemic. It is our collective responsibility and duty to deal with this pandemic. Let us all unite and cooperate in recovering from this crisis. She said that political parties should work with the governance and administration in providing relief and facilities to the needy people. We should try to save human life in this time of crisis by rising above party politics.

Chief Minister Mr. Bhupesh Baghel said that the state government is taking all possible measures to curb the rate of corona infection. He appealed to all political parties to make people aware to get the test done as soon as they show signs of corona. Until the test report comes, keep the infected person isolated and start treatment after the report. He also appealed to make people aware about using masks, physical distance and taking care of hands cleanliness. He said that patients are being treated free of cost in government hospitals. Tests and treatment rates have been fixed for the least financial burden on the people undergoing treatment under Dr. Khubchand Baghel Health Assistance Scheme and Ayushman Yojana. There is no shortage of oxygen in the state. He said that the state government has decided that 80 percent of the oxygen produced in the state’s oxygen plant should be used only in Chhattisgarh. Four licenses have been issued to industries for oxygen production.

He said that the number of RTPCR and Trunat Laboratories has also increased. There are currently 7 government and 5 private sector labs for the RTPCR test. Similarly, 31 government Truenat labs and 5 labs are in the private sector. There are 815 ventilators available in government and private hospitals. There has also been an increase in the number of beds, ICU beds, oxygen-rich beds in the state. Medical staff is being recruited. Besides, funds are constantly being provided to all districts for Covid management. Senior officials have been sent to Maharashtra and Hyderabad for smooth supply of this injection. Control rooms have been set up in all the districts and their numbers have been released. Instructions have been given to Gram Panchayats to set up quarantine centers for migrant laborers. Rescue and prevention measures for Corona are being reviewed by the ministers in-charge of the district and the secretaries in charge through virtual meetings. Care is also being taken to ensure that the needy face no problem.

Leaders of various parties made important suggestions in the meeting. Leader of Opposition Shri Dharamlal Kaushik suggested to arrange beds in hostels and social buildings at the development block level, beds in government and private hostels at other places as well. Shri Shivratan Sharma of Bharatiya Janata Party suggested to recruit the vacant posts of Health Department soon, adding other hospitals in Ayushman Yojana. Congress President Shri Mohan Markam said that his team is helping people by setting up control rooms in every district. The MLA, Mayor, Councilor of the party will give one month’s salary in the Chief Minister’s Relief Fund. The work of providing dry ration and medicines to the needy is also being done. Vehicles have been arranged to take the elderly to the vaccination site. He said that Chhattisgarh should get the amount given to the CSR fund by Chhattisgarh’s establishments in the Prime Minister’s Relief Fund. Mr. Neelkanth Tripathi of the Nationalist Congress Party drew attention to problems such as lack of oxygen, excessive fees charged by private hospitals for treatment. Shri Amit Jogi of the Janata Congress gave suggestions regarding vaccination of youth over 18 years of age, testing and tracking of corona patients. Shri Dhananjay Parihar of Shiv Sena emphasized the need to make aware about the use of Remdesivir injection. Shri Dhanraj Mahapatra of CPIM demanded special relief from PM Care Fund for developing infrastructural facilities in the field of medicine. Representatives of Gondwana Ganatantra Party and Samajwadi Party also gave suggestions in the meeting.

SED completes process of transfers of around 1200 Lecturers