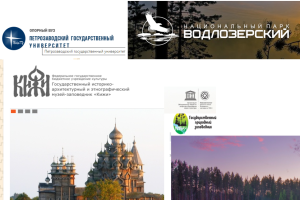 The Karelian Scientific Center of the Russian Academy of Sciences hosted the All-Russian Scientific and Practical Conference “Reserves and National Parks – Research Laboratories in the Open Air”, in which the teachers and students of PetrSU took part.
The conference was organized by the Vodlozersky National Park, the Kivach State Nature Reserve, the Karelian Research Center of the Russian Academy of Sciences and the Kizhi Museum-Reserve.

The conference was held in a mixed format: most of the reports were delivered face-to-face, and several speakers presented the results of their research carried out in specially protected natural areas online. The full-time conference was attended by teachers and students of the Institute of Biology, Ecology and Agricultural Technologies of PetrSU.

The reports presented by undergraduate and graduate students were on different topics. The work of Elena Valdaeva (4-year student) is devoted to unicellular organisms inhabiting the soils of the Kivach reserve (supervisor, Dr. of Biological Sciences SN Lyabzina). A lively discussion was caused by the report of Andrey Chalkin (graduate of the Institute of Biology, Ecology and Agricultural Technologies, postgraduate student, junior researcher of the Federal State Budgetary Institution VNIIKR) in collaboration with Dr. Biol. Sci. S.N. Lyabzina on the identified dangerous species of arboreal nematode in Karelia. Students of the Institute of Biology, Ecology and Agricultural Technologies N. Akisheva and D. Kondratyev were also involved in these studies.

The 4th year students of the “Biology” direction of study took part in the conference as listeners.

We express our deep gratitude to the organizers of the conference,

– noted the students and teachers of PetrSU.

Sixth session of the international BRIDGE project in St. Petersburg