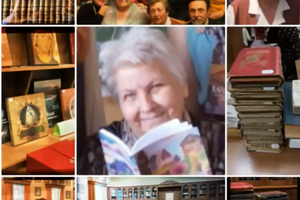 The All-Russian scientific seminar “Mikhailovsky Readings” was held, dedicated to the creative heritage of the famous Russian scientist-dialectologist, Honored Scientist of the Republic of Karelia, Lyubov Petrovna Mikhailova (1939-2020), who was the head of the Petrozavodsk dialectological school.
The name of Lyubov Petrovna Mikhailova is well known to Russian and foreign dialectologists and historians of the language for more than 300 scientific publications, participation in scientific forums and expeditions. Lyubov Petrovna is an Honored Scientist of the Republic of Karelia, a leading specialist in the field of Russian dialectology, a prominent organizer of the linguistic and regional studies direction in the work of the Russian language department of Petrozavodsk State University, one of the editors of the Dictionary of Russian Dialects of Karelia and Adjacent Regions, a thirty-five-year collective work in six volumes, which has long won international scientific recognition. Lyubov Petrovna perfectly knew how dialects were arranged and in what ways, she remembered hundreds and thousands of texts in Russian dialects of Karelia.

Many colleagues, friends and students of Lyubov Petrovna Mikhailova, grieving over the loss of their Mentor, Friend and Teacher, took part in a scientific seminar dedicated to the memory of Lyubov Petrovna and her enormous long-term contribution to our science, without which it is already difficult to imagine the development of Russian dialectology over the past decades … The participants of the seminar suggested making this forum a regular event of the Russian Language Department of PetrSU.