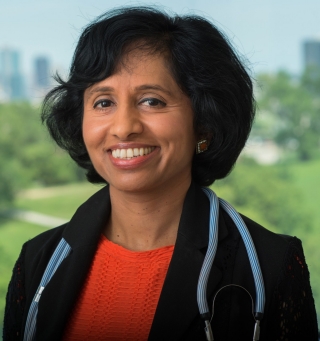 Allergy and immunology expert Chitra Dinakar, MD, clinical professor of medicine at the School of Medicine, died March 27 of cancer at El Camino Hospital in Mountain View, California. She was 54.

Dinakar arrived at Stanford in 2017 and, by the fall of 2019, had established Stanford Health Care’s allergy, asthma and immunodeficiency clinic in Atherton, the institution’s first such clinic for adult patients.

“Dr. Dinakar’s contributions to Stanford Medicine — particularly as the driving force behind our new allergy, asthma and immunology clinic — will have a lasting impact on our institution and the health and well-being of countless people,” said Lloyd Minor, MD, dean of the School of Medicine. “Her dedication, energy and warm spirit will be missed.”

“She was such a kind, caring, enthusiastic person,” said Mark Nicolls, MD, chief of pulmonary, allergy and critical care medicine at Stanford. “She received numerous honors in her field of clinical allergy. She was also a real mentor to young clinician-educators and researchers. She really cared about helping younger people develop their own careers.”

‘A dynamic woman of action’

Dinakar was born March 10, 1966, in Bhilai Nagar, a city in central India. She graduated at the top of her class from the Jawaharlal Institute of Postgraduate Medical Education and Research, one of India’s most competitive medical schools. In the fall of 1984, as a new medical student, she was alphabetically assigned to conduct lab activities with Deendayal Dinakarpandian, another new student.

“We were together from the very first day, dissecting the same cadaver,” said Dinakarpandian, MD, PhD, an informatics expert and clinical associate professor of medicine at Stanford. The two remained together through all their experiments and clinical rotations, graduating in 1990. They married in 1992.

Her dedication, energy and warm spirit will be missed.

Dinakar was an enthusiastic athlete, winning track and field events in medical school intramural competitions: “She was only 5’2” but she could sprint faster than most of the boys,” her husband said. “She was very multifaceted, a dynamic woman of action.”

In addition to science and athletics, she loved literature and performing Indian classical dance.

In 1993, the couple moved to Ohio, where Dinakar completed a residency in pediatrics at the MetroHealth Medical Center in Cleveland, followed by a fellowship in allergy and immunology at the Cleveland Clinic. In 2000, Dinakar was hired at Children’s Mercy hospital in Kansas City, Missouri, where she worked until coming to Stanford in 2017. She treated patients, co-authored more than 100 scientific papers, mentored young physicians and undertook many leadership roles, such as helping write evidence-based standards of care for asthma patients and serving on the committee that established questions for her specialty’s board certification exam.

She was also an enthusiastic mother to their two sons, her husband said. She enjoyed making treasure hunts for them, drawing with them on the driveway using chalk, singing and playing with them, and teaching them about Indian culture.

At Stanford Health Care, Dinakar became clinical chief of allergy, asthma and immunodeficiency and devoted herself to launching the allergy and immunology clinic for adults. She was diagnosed with cancer shortly after coming to Stanford but stayed deeply involved in her work, including hiring the clinic’s physicians, Anna Arroyo, MD, and Priscilla Wong, MD.

“She had reached the top of her field and was always bringing other people up with her,” said Wong, clinical assistant professor of medicine, recalling Dinakar’s strong encouragement when Wong was considering the Stanford job.

“She really spent time to talk to me about the benefits and challenges of academic medicine, and said, ‘Go for it,’” Wong recalled. “It inspires me to want to be that type of mentor for someone else down the road.”

Arroyo, clinical assistant professor of medicine, said of Dinakar, “She was very dedicated to the clinic, and she spent a considerable amount of time and energy, even when she was quite sick, to help ensure its success. I’m very appreciative of all the time and effort she spent on establishing the clinic and guiding us through its early stages. I’ll miss her.”

In addition to her husband, Dinakar is survived by their sons, Akshay Dinakar, who graduated from Stanford in 2019, and Bhavish Dinakar, who is graduating from UC-Berkeley this spring. She is also survived by her father, Padmanabha S. Kameswaran; mother, Jagadha Kameswaran; sister, Prabha Badrinarayanan; and brother, Sukumar Kameswaran.

The family held a private funeral service on March 31 and plans to hold a larger celebration of life at a later date.