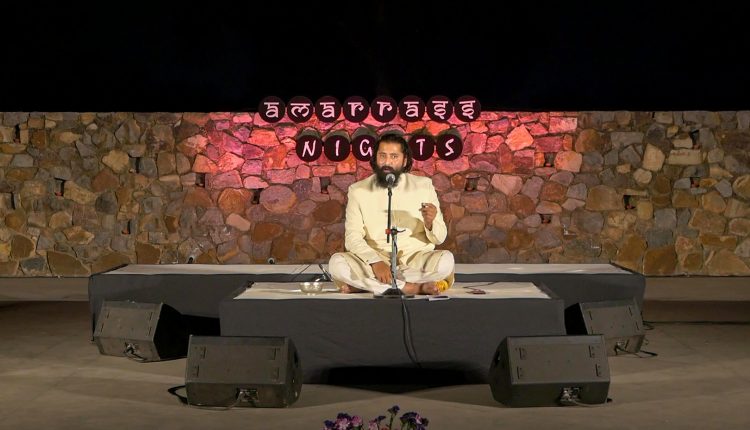 New Delhi- Amarrass Records is elated to restart the physical monthly music scene once again post pandemic. AMARRASS NIGHTS at Delhi’s Sunder Nursery’ on a slightly cooler Saturday, witnessed  Mehfil~e~ Tarranum, an evening of transportive music from Awadh, Lucknow and Uttarakhand. Askari Naqvi, a trained vocalist from Lucknow and Rehmat-e-Nusrat, a group of passionate young musicians from the hills of Uttarakhand, conceived and led by Sarvjeet Tamta,  gave mesmerising performance to a discerning audience who had turned up good numbers

Askari Naqvi during his performance explained the nuances and culture context of the songs and ragas. He further explained, “Growing up in the region of Awadh is much more complex than just ganga jamuni tehzeeb. Although examples of ganga jamuni tehzeeb can be seen very much in the literature & in various traditions which have been there in Avadh for hundreds of years. The idea of Lucknow -o – Avadh is a result of churning of various ideological sources from Kabir to Meer, Anees to Dabeer, from Peer to Murids & from Miryasins to families. Lucknow-o-Avadh is the closest in the memory of people than any other region where we saw & grew up in a very very complex cultural milieu.

Rehmat-e-Nusrat, a group of passionate young musicians from the hills of Uttarakhand, conceived and led by Sarvjeet Tamta enthralled the audience with the timeless tradition of qawwali in their unique way. Their renditions of Sufiyana kalaams by Amir Khusrao, Meera Bai, Baba Bulleh Shah and, of course, the magical qawwalis of Ustad Nusrat Fateh Ali Khan surely connected a bond with the listners. They sang Ae ri sakhi, Mai jana jogi de naal  and Har ek baat pe Kehte ho (ghalib). They presented these qawwali’s with soul that is missing in most presentations these days where the qawwalis are merely presented  like songs – artists belting down top 10 and getting off stage.

Sarvjeet Tamta presented these with the soul each deserved, he was completely involved in and with the lyrics – both musically and emotionally …which is why each qawwalli lasted close to 20/30 minutes. It was a magical!!

Ashutosh Sharma Co – Founder,  Amarrass Records said “Honestly we were feeling rusty because of pandemic but the amazing turnout for Amarrass Nights has bestowed us with renewed energy. Good music needs amazing patrons, we will continue our musical path and we plan to make Amarass Nights a monthly affair in Delhi.

Ural Federal University: University and Prosoft-Systems Will Reduce the Number of Accidents in the Electric Power Industry