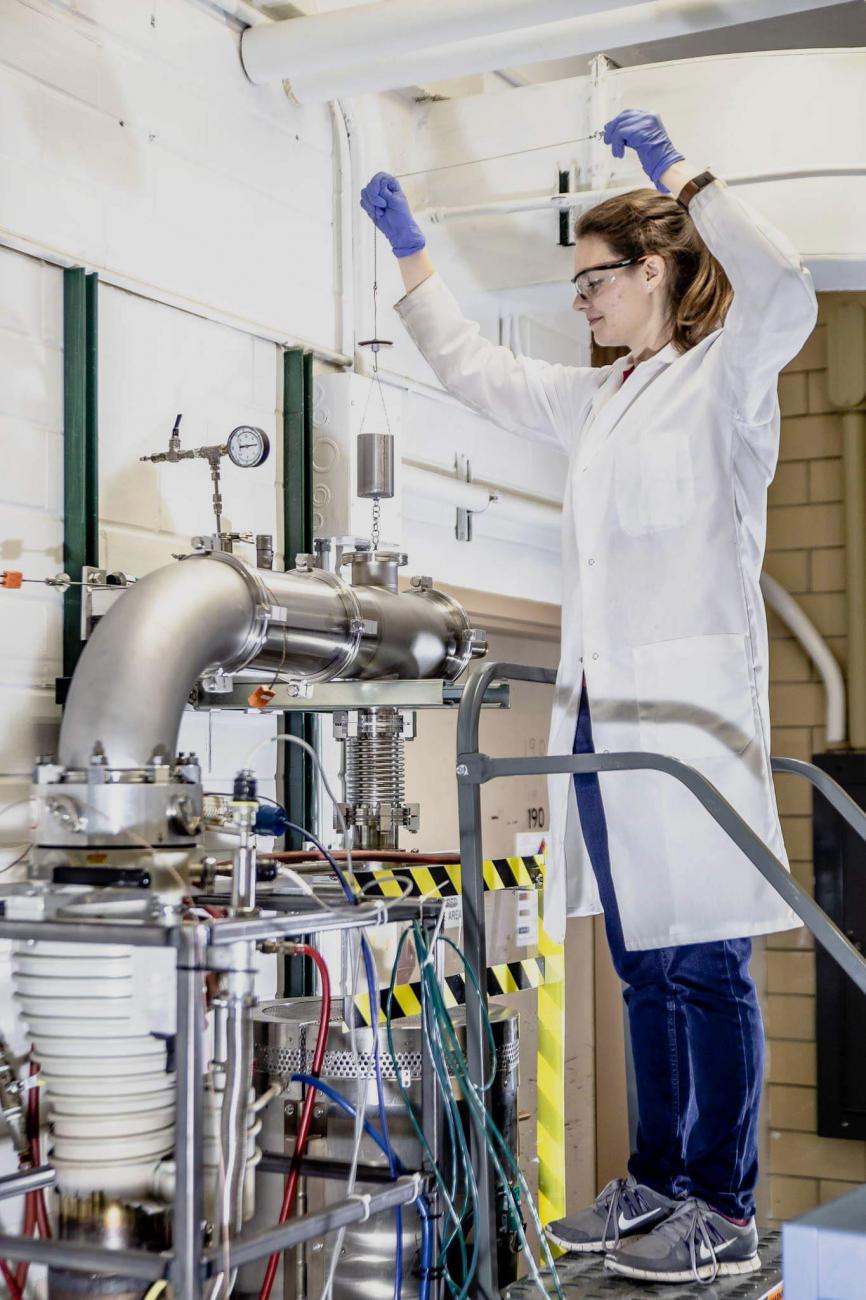 When Ames Laboratory Graduate Research Assistant and Ph.D. candidate Emily Rinko got the call from a Washington, D.C. area-code, she thought it was spam. She didn’t know her name had been submitted for a brand new subcommittee under the President’s Council of Advisors on Science and Technology (PCAST), which would bring on students and early-career scientists to participate in developing PCAST reports and science policy. Emily Rinko in Laboratory

The “Students, Post-Doctoral, and Early Career” Subcommittee to PCAST (SPEC) is the first of its kind. Director of The White House Office of Science and Technology Policy Kelvin Droegemeier, Ph.D., spoke about his ambitions for SPEC at the fall American Geophysical Union conference in 2019. “[I created SPEC] because [these individuals] own the future. I miss the intellectual energy postdocs and [other students] bring to the table,” he told an auditorium. He wanted to involve them in the policy that will be affecting thousands of their fellow students and early-career scientists. Their perspective as the people loading the machines with samples, performing the calculations, and monitoring experiments would be invaluable.

After careful consideration, Rinko, who is pursuing a Ph.D. in Materials Science and Engineering at Iowa State University, accepted the nomination. The decision was about service. “I want to help create a positive and supportive environment for future scientists,” noting that her feedback will help make science policy feel more accessible to students like herself, “If you don’t feel like you belong in STEM, you’re not going to do your best work, and that goes for any workplace.” Motivated by her convictions , Rinko was appointed by her fellow SPEC committee members to a leadership position within SPEC. She now serves as Co-Chair of SPEC alongside Dr. Sharon Hrynkow, a PCAST member.

“We are delighted that Emily Rinko has been awarded the honor of participating in the PCAST subcommittee. It is so vital for early-career scientists to develop their leadership skills, and this recognition affirms the excellence we’ve seen from Emily,” said Ames Laboratory Director Adam Schwartz.

While COVID-19 has made the path less straightforward than usual, Rinko and her nine fellow committee members who range from the undergraduate level to the early-career and post-doctoral level have been giving feedback on PCAST’s recommendations in its June report. Their perspectives will be used to make policy more agile to scientists at all levels in laboratories across the country.

After falling in love with materials science in the eighth grade, Rinko has had no problem sharing her love of science. In her undergrad, she completed several internships with Lockheed Martin where her work briefly took her within the orbit of the Orion mission, and focused on researching how to make spacecraft materials lighter and stronger.

Rinko is also the vice president of ISU’s Materials Research Society, a member of the Public and Government Affairs and Powder Metallurgy Committees of The Minerals, Materials, and Metals Society (TMS). She came to Iowa State University from Colorado as an undergrad because of its state-of-the-art materials science and engineering program and accessible price tag. She majored in Materials Science and Engineering specializing in ceramics and polymers for her undergraduate degree, and came very close to also specializing in metals, but at the time Rinko found metals “challenging.” It was only natural then, she says, to get a Ph.D. with a focus in metals.

Rinko’s work focuses specifically on AlNiCo (i.e. alnico) magnets. Under the supervision of Iver Anderson, Ph.D., her research pursues a better understanding of new, powder-based alnico magnets, with the larger goal of improving their magnetic properties. She uses compression molding and sintering to make her magnets, both of which are widely-practiced in powder metallurgy industry for part manufacturing.

It would be several milestones for alnico if compression molding can be shown to have competitive or better magnetic properties compared to the best commercially available alnico magnet. First, with its stable temperature performance and strength, it’s possible that alnico could be an alternative to rare earth magnets currently used in a variety of electric machines, such as electric cars, wind turbines, and more. Another benefit is broadening the portfolio of usable permanent magnet types, which means more kinds of electric machine designs. If the lab can make alnico magnets with this technique and if the magnets stay just as strong for just as long, this could have huge implications for the industry and the country – from right here in Iowa.

Rinko sees SPEC involvement as an opportunity to improve her fluency in science policy and broaden her experiences outside of a lab. “I’ve had some exposure to science policy thanks to my involvement in the P&GA TMS subcommittee, but I have never been involved with creating science policy before SPEC,” she said. Now, she’s seen how important collaboration between industry, government, nonprofits and academia is in solving global challenges. “Learning the dialog, priorities, and the logistics of science policy is a great first step at improving my fluency in something that is outside of my field, yet has a lot of influence on it.”

UP Career Mentorship Programme goes from strength to strength