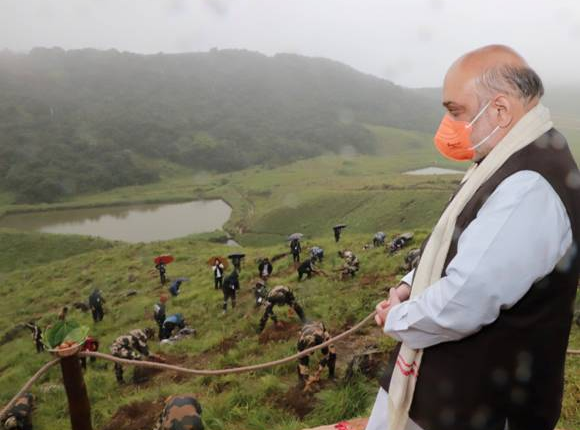 Shri Amit Shah gave the slogan “Evergreen Northeast”, underlining the importance of afforestation and tree plantation. The Home Minister said that earlier Cherrapunji used to have rains throughout the year, but due to indiscriminate harvesting in the name of development, the situation has changed. He said that an ambitious project to make Cherrapunji green again has started today. Shri Amit Shah informed that the entire area of ​​Cherrapunji is going to be adopted by Assam Riflesfor the purpose of plantation. He said that trees are cut for fuel and other uses, so 80% of the total land will be planted with traditional and long lifespan trees, the remaining 20% ​​will be used for animal feed, ornamental plants and nursery which will meet all the requirements and help reduce the felling of long lifespan trees. With this technique, multi-level farming is done and the forest grows 30 times faster and after 3 years it becomes free of maintenance. Shri Shah said eco-tourism will be greatly benefited by this, besides tourism of Meghalaya will also get a boost.

Shri Shah said that our country is intact because of the paramilitary forces deployed to protect the country’s borders. Since the last two years they are also shouldering the responsibility of improving the environmentand so far have planted one crore &forty eight lakh (1.48 crore) trees, out of which one crore thirty six lakh (1.36 crore) plants are growing. He said that this year also about one crore saplings will be planted in different areas by making a strategy and in the next three years a target has been set to plant 1 million trees in 1000 hectares.

The Union Home Minister said that today the whole world is fighting against global warming and climate change. Shri Narendra Modihas done the work of reducing carbon emissions by distributing a large number of cooking gas cylinders across the country and today India is at the forefront in hydropower and solar power sectors. Shri Shah said that with the proposed action plan of Shri Modi at the Paris Agreement, the whole world is fighting against global warming and carbon emissions. Shri Shah said that the battle we are going to fight cannot be successful without the cooperation of the general public at the district panchayat and taluka panchayat levels.Shri Shah called upon all panchayats to cooperate in tree plantation programmes being carried out by the paramilitary forces at various places, join hands with them and help the paramilitary forcesin the plantation of 10 crore saplings and nurturing them.

In his address, Shri Amit Shah said that as part of the Prime Minister’s ambitious project Jal Jeevan Mission, the Ministry of DoNER and the Government of Meghalaya, under the North-East Special Infrastructure Scheme, the Greater Sohra Water Project costing ₹ 25 crore, will provide pure drinking water through taps to every household. Shri Shah said that if the source of water is not pure then people will not be healthy, therefore Shri Modi has set the target of providing pure drinking water to every household in the state of Meghalaya and the country before the completion of 75 years of Independence and 50 years of Meghalaya.There is an ambitious programme to provide drinking water to 2,80,000 families in the state of Meghalaya, which is clubbed into 1874 small projects. Shri Amit Shah said the task of delivering such an ambitious project in this remote area is extremely important and challenging. The Central Government has so far allocated Rs.400 crore and as the work progresses further allocations will be made.Shri Shah said that the Assam Rifles have a history that whatever work has been given to them in the last 180 years, they have completed it in time.

All the Central Armed Police Forces (CAPFs) are planting trees across the country today as part of the tree plantation drive launched at the initiative of Home Minister Shri Amit Shah. Today more than 16 lakh and 31 thousand saplings are being planted under this campaign.