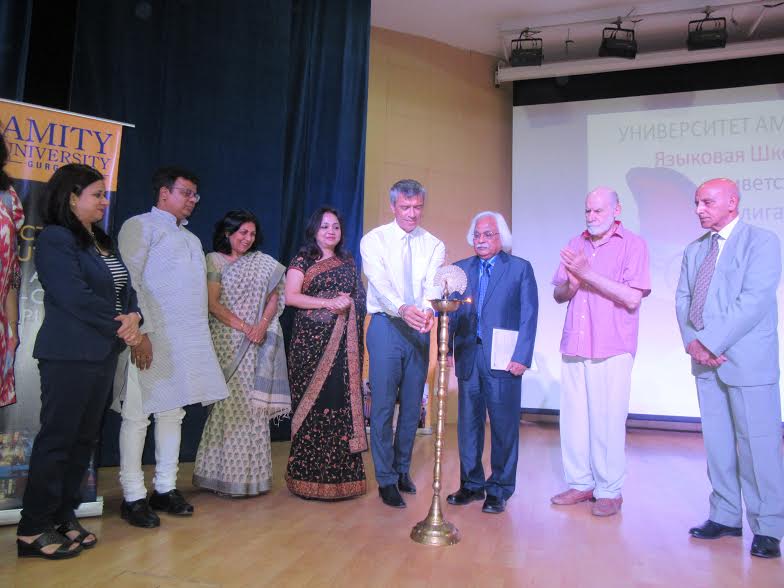 New Delhi: Amity School of Languages and Centre for BRICS studies organised a Seminar on ‘Reviewing 70 Years of India-Russia Diplomatic Relations and Future Prospects’ in association with RSUH (Moscow), RCSC (New Delhi) & Embassy of Russian Federation (India) and University of Delhi. The event was oragnised to celebrate the 70th anniversary of establishment of diplomatic relations between the two countries. It was on 13 April 1947 – four months before India’s independence – that diplomatic relations were established between the two countries. Over the last seven decades, the relationship has blossomed into a Special and Privileged Strategic Partnership.
The chief Guest of the event was Prof. Alexander Stolyarov, Director, International Centre of South Asian Studies, RSUH, (Moscow).Various eminent speakers like Mr. Alexander Schegolev, Deputy Trade Commissioner of Russia in India shared his views on India-Russia economic ties, Dr. Neelakshi Suryanarayan, HOD of department of Slavonic Finno-Ugrian Studies discussed the future prospects of India-Russia relations in the field of education, Dr. Shiv Shakti Bakhshi, Excutive Editor Kamal Sandesh discussed about Russia’s role in Make in India programme started by government of India. Dr. Indira Gazieva, Professor of hindi, In chair of Oriental Studies, Institute of Linguistics, RSUH, Moscow also graced the ocassion.
While addressing the students Prof (Dr) P B Sharma, Vice Chancellor, Amity Uniiversity Gurgaon “highlighted India’s role in globalisation and emphasised the importance of India’s strong relationship with Russia since both the countries share common legacy in cultural, philosophical and social front .”
Prof Padmakali Banerjee PVC, Chair person of BRIC centre while expressing her happiness about the MoU signed between the two universities also reiterated that the relation between the two universities is also a great step in our diplomatic relations and would create a happier world around us.
Alexander Stolyarov, Director, International Centre of South Asian Studies, RSUH, (Moscow) delivered a lecture on ‘Reviewing 70 years of India Russia diplomatic relations’. He explained in detail how historically this current friendly relationship was built with the erstwhile USSR even when India had not attained freedom. In a very extensive presentation he highlighted the role that various ambassadors of both the countries had played in building and strengthening the diplomatic ties and emphasised how ambassadors from both countries have always stood up for having cordial and cooperative approach in diplomacy and how they have acted even when the situations were adverse.”
Mr. Alexander Schegolev, Deputy Trade Commissioner of Russia in India gave a presentation on ‘New Era of cooperation between Russia and India.’ He drew attention to manifold increase in Trade between 2010-2017 and the new targets set by the leadership of the two countries target to develop greater bilateral trade, have ambitious future plans in priority spheres and to develop the new trade route via Iran that will reduce the transportation time from 40 to 19 days.
Shiv Shakti Bakhshi, Excutive Editor Kamal Sandesh emphasised on the importance to form a global community that understands each other. He talked extensively on the Make in India initiative of the Government of India and empahised the need to generate more employment and produce goods of international standard. He termed Russia as India’s time tested friend not just politically but also that both countries share goodwill that comes with historical experience. He appreciated Russia’s cooperation in politics, defence, civil and nuclear technology, anti terror initiatives and space technology. In addition to this he said that both countries now need to concentrate more on economic ties. After Putin’s visit to India in 2016 trade has also received a major push.
The highlight of the event was the signing of MoU between Amity University Gurgaon and Russian State University for Humanities, Moscow. Both the universities have agreed to cooperate and develop in the field of :
• Academic mobility (of faculty members and students)
• joint research activities
• joint oraganisation and participation in seminars, courses, workshops ans other academic activities on matters of mutual benefits.
• oraganisation of summer and winter schools
• exchange of publications and other teaching materials

University of Exeter: Internet use during pandemic linked to…

University of Exeter: Experts to establish new archive of…

12 students have been selected to participate in BRICS youth festival to be held in October 2017 in Moscow and Sochi, Russia for cultural exchange.

University of Exeter: Internet use during pandemic linked to increased mental health…

University of Exeter: Internet use during pandemic linked to increased mental…

iednewsdesk May 4, 2022
Using the internet frequently during the height of the pandemic has been linked to poorer mental health for young…

University of Exeter: Experts to establish new archive of Kurdistan’s…

University of Exeter: Immigration rules mean reforms to give domestic…

University of Exeter: Smartline shortlisted for the Housing Heroes…

University of Exeter: Efforts to take fake news and misinformation in…

University of Bristol: Beetle iridescence a deceptive form of warning…